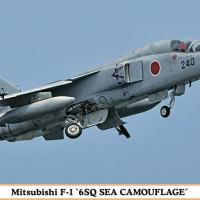 The usual “Heavy Appreciation” goes out to Hasegawa USA for providing IPMS USA yet another fantastic re-release of one of Hasegawa’s catalog for review.

This kit is a re-release of Hasegawa’s mid-1980’s F-1 models. The molds have endured the test of time, and no flash is present on this kit. Engraved panels, accurate details, tight construction, and a change in pace for F-1 lovers in the form of a new decal sheet. Although I like the standard F-1 Japanese three-color scheme, this was just, well, different!

Starting with the cockpit, relief and raised detail is provided for the side panels and instrument panel, over which decals can used if your painting skills are not up to the effort. I used them and Solvaset helped them snuggle in. A three-part indigenous ejection seat is provided, to which the canopy actuator decision is applied, as that part is sandwiched behind the headrest halves. Use of the provided aircrew figure is recommended to avoid having to make a harness. In this scale the detail on the figure is fantastic, and everything fit into place. The control stick rounds out the interior, and no problems will be experienced in construction here. You can extend the canopy or have it shut, and in this kit the fit is great either way.

The basic fuselage is set up for the two-seat F-1, and appropriate panel and fuselage inserts are provided to fill the empty back section, while carrying through the aerodynamic “hump” characteristic of the aircraft. I have always thought this jet looked like a Sepecat Jaguar 1 on steroids. The intake ramps and scoops are seamless and go back far enough that they don’t need to show the entire trunking area.

The exhaust/ augmentor section is very nicely done, with flameholder, turbine, tube, and petal details. The lower aft section has appropriate fastener holes, and the arresting hook snuggles in.

I constructed the basic kit in about four hours, including interior painting. Weld-type cement and acrylic (Vallejo in this case) paint. I’m a convert for this stuff! The lower fuselage panels incorporate the nose well and main gear wells. Landing gear details are all appropriate for this scale; I call it “Goldilocks” gear, “Just right”, strong but simple. And since there is no aftermarket resin to weigh things down, I dropped a small fishing weight into the forward fuselage and secured with thick superglue.

With the exception of the rudder, the control surfaces are separate and can be displayed in various positions for effect; in the case of the stabilators, poly caps are used for retention, facilitating painting off the jet. Very nice, particularly with the various bare metal panel colors on these items. The speed boards look good in the dropped position and have sufficient detail to just leave as is.

External stores are two tanks, two AIM-9L, and a CBLS-200 Practice bomb dispenser with four practice rounds. Detailed pylons for five stations are included, and decals add just the right touch to their appearance. I’m not using the practice bomb dispenser, so I will be sourcing other weapons. A “weapons load” map is provided on the instructions. Fit on the tanks was a bit off on the fin assemblies, but in the end I won. I painted these neutral gray for contrast.

After the seams cured, a bit of sanding stick action on the center seam, and a bit of Vallejo putty ensued around the forward wing to fuselage joint and intake mounts. More light sanding, then a primer coat. Antenna installations were next. I used a Master Details pitot tube from an F-1 Mirage and the kit was almost done.

I painted the lower part Light ghost gray, and used standard Dark Ghost Gray with a bit of black added to ensure contrast for the kit camo scheme. Boyd’s gloss spray for undercoat, decals next (which worked great, only took a couple of hours) and we are finished! I final coated with Testors Dullcoat, then tried a bit of weathering to break up the monotony of the grays. Went a bit overboard on the underside, but it still looks fine to me.

Another fun, truly enjoyable build! I was humbled to have the opportunity to do this model, as the markings are truly “one-off”, limited edition. Thanks again to Hasegawa USA for providing IPMS this great kit!