Mikoyan MiG-31, The Full Story of the Foxhound 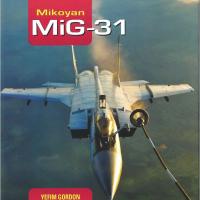 With over 700 titles in print, Crécy Publishing has a growing reputation as a premier aviation, railway and transport publisher. The Crécy stable includes the highly respected Hikoki, Classic and Noodle book imprints, producing unique and highly illustrative bestselling books. Crécy books, with over 700 titles in print are available through a worldwide network of distributors and stocklists including museums, specialist retailers and high street bookshops.

Yefim Gordon was born in 1950 in Vilnius, Lithuania (then part of the Soviet Union) and graduated from the Kaunas Polytechnic Institute in 1972. He has been researching Soviet and Russian aviation history for more than 40 years. A professional photographer, Yefim Gordon has published hundreds of features and photographs in Russian and foreign aviation magazines. He has authored and co-authored more than 120 books on Soviet and Russian aviation.

Dmitriy Komissarov was born in 1968 in Moscow and graduated from the Moscow State Linguistics University in 1992. He has worked as a translator ever since, with the most of his work associated with his interest in aviation. Dmitriy Komissarov has authored at least two books and translated or co-authored more than 50 others. He has also written numerous magazine features in two languages on Soviet and Russian aviation.

This tome is the latest of the MiG-31 series of books that Yefim Gordon has authored and published over the years. This includes the 1997 Aerofax book of 96 pages, “MiG-25 Foxbat, Mig-31 Foxhound”; 2005’s Midland Publishing’s 224 page Famous Russian Aircraft: MiG-31; 2011’s Pen & Sword’s 227 page FlightCraft Book 8 Mikoyan MiG-31 Interceptor. Yefim Gordon and Dmitriy Komissarov have packed a whopping amount of information into this 320 glossy page monograph. I counted 140 black and white photographs, 619 color photos, 67 line drawings, 23 color illustrations, and 79 color profiles. Andrey Yurgenson provides all the line drawings which also include sections. The color profiles by Viktor Mil’yachenko; Sergey Igmat’yev are scattered throughout the book early on, but become much more apparent later on in the book (see Page 274 as an example). The front cover features a color photograph of a MiG-31BM (Type 28) releasing from refueling. The large color photograph on the rear cover features a MiG-31B (51 Blue) taxiing past two other Foxhounds. There are several tables throughout the book, but Appendix Two: MiG-31 Family Production List is truly significant at ten pages long.

Yefim Gordon and Dmitriy Komissarov kick off this tome with the beginnings of air to air interceptors in the Introduction. The first “Heavy Interceptor” was the Lavochkin La-250, dubbed ‘Anaconda’ due to its looks. The Russian goal of an interceptor capable of traveling in excess of 500 miles and at altitudes above 65,000 feet. Heavy interceptors were also not designed to fight in close combat and were originally armed with missiles only. Although the La-250 had a troubled development history, before being cancelled; other designs soon emerged. These eventually gelled into the MiG-25 Foxbat. The MiG-25 first flew on March 06, 1964 and was introduced into service in 1970.

Design studies on the MiG-25 Foxbat successor began during the Foxbat’s test program in 1965, and these are described in Chapter One: From ‘Bats’ to ‘Dogs’: Shaping the Interceptor. Many of the design studies are depicted in drawings or in models. A good example is illustrated on Page 13 where alternative Yak-33 studies are depicted. The MiG-31 was originally considered to be an upgraded MiG-25, but the desire to have higher sea-level speeds, longer range, and improved radar, while retaining the MiG-25’s ceiling and high speed at altitude.

The MiG-31 achieved its first flight on September 16, 1975 and went into service in 1980. Chapter Two: The MiG-31 Takes Flight, addresses the MiG-31 prototypes and the initial production airframes. Page 69 highlights just some of the many changes that were introduced in this timeframe. The upper two black and white photographs show off an all-metal nosecone and a one-piece wrap-around windshield that did not make it into production. There was no shortage of accidents during this period and several first-person accounts are quite enlightening. I would note that one typo on page 82 lists all of the pilots involved in this phase of the program as being for the MiG-29. I am fairly positive these twenty-four test pilots were working on the MiG-31 flight testing and acceptance testing.

Chapter Three: The ‘Kennel’: Foxhound versions addresses the nearly 30 variants of the Foxhound. The information on a few of these variants is quite slim, but most of them are discussed in depth. A good example is on Page 143 that shows off a model of the MiG-31I (‘Ishim’) Suborbital Launch System. The hope for this project was to modify some of the MiG-31D airframes in Kazakhstan to enable the placement of multiple small satellites into orbit on short notice. Ultimately, this project did not go forward for a variety of reasons, but primarily due to a lack of a market. The following Chapter Four: The MiG-31 in detail features plenty of color detail shots and black and white drawings. These cover all the major airframe components, cockpits, landing gear, radar, and armament. A good example of the detail that can be found is displayed on Page 202.

The final chapter (Five: ‘Beware of the Dog’: The MiG-31 in Service) kicks off with what the Soviets considered a significant threat: The Lockheed Blackbirds. The Blackbird overflights provoked the Russian radar systems providing a nice map of them to the United States. Another factor was at the time, Russian fighters were not equal to the F-15C Eagle, F-14D Tomcat, or even the F/A-18 Hornet fighters. Initial conversions from the Yak-28P, Tu-128/Tu-128M, and the Su-15TM provided a substantial upgrade, however, the slow MiG-31 production rate delayed many units from converting well into the nineties. There are several first person accounts of intercepts, including a few Blackbirds. This chapter also includes most of the color side profile illustrations. Although ‘Nose Art’ was not permitted, many of the Foxhounds carried names of Soviet war heroes like “Boris Safonov, Twice HSU”. The contents listed below just reinforce how thorough this book is.

I found a first person account of a major flight incident quite interesting. On April 11, 2008, a MiG-31BS had its forward canopy rip away on a post-repair check flight. “We lit the afterburners and accelerated to Mach 2.35 at 52, 490’. After this we initiated a turn back to base. Since we had 6.5 tons of fuel remaining, we decided to burn off another ton before deaccelerating to subsonic speed…to cool the canopy…Just then, there was an explosion followed by a dreadful noise. For a few seconds, I had no idea what had happened, but I remember that the audio warning system was saying that the aircraft was maneuvering at its limit. The powerful airstream squeezed me into my seat with such force that I could barely breath.” If you want to know what happened next, you will need to buy this book!

I have to say that I have been fascinated by the MiG-25 and MiG-31 ever since Jay Miller loaned me an early release copy of Yefim Gordon’s MiG-25 Foxbat, Mig-31 Foxhound 1997 release through AeroFax. This release adds 96 pages from the prior Famous Russian Aircraft monograph on the MiG-31 and I am extremely impressed with the coverage and quality of this monograph. Mind you, this isn’t a quick read, due to 320 pages of small print, but it did keep my attention. The 849 photographs and drawings are well captioned as are the 79 colorful side profiles. Yefim Gordon and Dmitriy Komissarov have found a path to weave in a tremendous amount of data and still manage to provide a compelling and readable storyline. This is an essential book in your library for both the historian and the scale modeler.

My thanks to Crecy and IPMS/USA for the chance to review this great book.