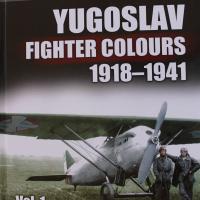 After World War I, the map of Eastern Europe was radically changed, with a number of ethnic groups becoming independent for the first time. One country, Serbia, eventually became part of the Republic of Yugoslavia, which joined the Serbs, Croats, and Slovenes into one country. This, of course, forced considerable reorganization of their armed forces. Of course, Serbia has virtually no aircraft manufacturing industry, so the Yugoslavs were compelled to acquire airplanes of foreign manufacture, mainly those built in Germany, Austria-Hungary, France, Italy, and England. German and Austrian aircraft were usually acquired as reparations due to the Treaty of Versailles, while the British, French, and Italian types were purchased directly. World War I vintage types were used throughout the twenties, but newer types were acquired in the thirties. One event that caused some confusion was the Great Depression, which began about 1929, and this slowed down the acquisition of new aircraft for some time.

In the early thirties, many air forces were replacing World War I vintage aircraft with more modern types, and Yugoslavia bought a substantial number of fighters, primarily from France, but also some other countries. This book gives an account of the types of aircraft they obtained up to the outbreak of World War II. Although the book indicates that the main subject is color schemes, that is only partially true, as the authors also describe the operational career of the aircraft, type designations, serial numbers, markings, and camouflage schemes. In addition, the aircraft specifications and detailed information is usually provided in tables at the end of each chapter. There is a LOT of highly useful information presented in this book.

The following aircraft types are described:

This book has a lot of useful information for modelers and anyone interested in aviation history. In addition, numerous black and white photos of the aircraft in service, sometimes after heavy landings, give an excellent picture of the aircraft in service. A thorough explanation of the markings and insignia systems is provided, and excellent full color three view drawings are provided showing markings and camouflage schemes. The book only covers the subject up until the outbreak of World War II, but Volume 2 will probably cover at least the World War II period. I’m looking forward to that one. If you are interested in this period of history, this book is definitely worth getting. Don’t miss out on it.

I would highly recommend this book for anyone interested in modeling aircraft of this time period.

Thanks to MMP Books and Phil Peterson for the review copy.