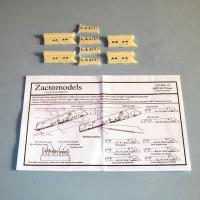 While Trumpeter has come out with a lot of large scale Soviet kits, there are usually some things that could stand improvement with these. Their 1/32nd scale Mig-21 is a solid kit and I have seen it built up into a nice finished kit many times. That being said, one of the deficiencies of the kit is its weapons pylons. They have minimal detail and like a lot of injection molded pylons, no detail whatsoever on the bottom.

Zactomodels has two varieties of these to select from, early and late, and there are differences between the two. The modeler needs to research the particular aircraft to determine which one is needed. The pylons for the Mig are designated BD3-60-21, early or late.

Let's look at what's in the box. The set comes with 4 pylons- two inner and two outer that are perfectly cast. Also contained is a complete sprue of hardware for each pylon including complete sway braces options.

Test fitting to the wing is superb - the pictures I took are just sticking them on the wing with no prep work so a little touch of sanding and they will be perfect. Also remember that you can go to the Zactomodels web site, download the instructions and follow the thread on ARC also.

Another winner from Chris Wilson and Zactomodels. Perfect casting, superb detail and information about the part and great prices- highly recommended.

Editor's note: There are three kitsets with simlar titles but for "Early" and "Late" design versions. All prices are list with S&H extra.

Pylons in place
Previous Next