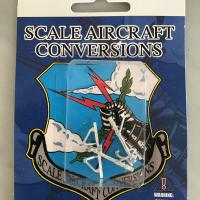 Recently I was given the opportunity by IPMS USA to review Scale Aircraft Conversions adaption of the Curtiss P-40B landing gear in white metal for the 1/48 Airfix kit. This set consists of two main gear legs, the two retraction strut pieces, which are on a metal sprue, and the tail gear strut. These are direct replacements for the parts from the Airfix kit. When comparing the kit landing gear and the SAC landing gear side by side you will notice they are very similar, other than the difference between plastic and white metal. Ignore the rough texture in the pictures all white metal is like this but will not show once painted. Overall this is highly recommended for stronger landing gear and added detail and is a great addition to the Airfix Curtiss P-40B kit. I would like to thank Scale Aircraft Conversions for another great offering in metal landing gear and IPMS USA for the opportunity to review this item.

Comparison to kit parts
Previous Next