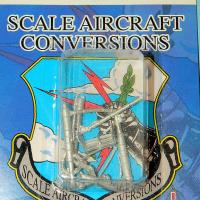 Consisting of 7 separate well-cast white metal parts, this gear is the usual replacement for the kit gear. Hobbyboss provides excellent kits with great detail, but usually has some things simplified. In this case the landing gear has everything it needs attached to the main gear, and as to the nose you add kit shimmy dampers, doors, and taxi lights. The FOD/Mud Guard is supplied with the set as well.

This SAC set adds the usual structural strength to the weakest part of most models: The landing gear. Cast tough yet malleable white metal, it addresses any concern for splayed and failed landing gear for Hobbyboss’ SU-30MKK.

Like most of the rest of the Sukhoi family being offered in today’s model land, the HB kit provides sound foundation for SAC’s gear. The Main gear trunnions are mounted first, but I had to drill them out to accept the pin on the main gear. As on my recently reviewed GWH SU-35 SAC replacement gear, I found it necessary to drill out the landing gear boss on the HB SAC replacement gear trunnions about 1/8 “ deep, as the holes were blocked by metal overflow. This is to be expected in short run projects, and I was able to drill while the parts were installed on the kit. The effort was worth it, just use a sharp bit and try not to front-load or press on the drill too hard. You may have heard the expression “let the tool do its job”… and in this case, that was appropriate. Drill carefully and you will be rewarded.

Ignore the “D” shape on the strut, as you will have to utilize modeling skill to install this gear by eyeball. I decided to lightly glue the strut in place, and immediately install the assembly on the model. This allowed me to align the gear correctly for camber, toe-out, and overall positoning. The aft drag links were also used to make sure the gear was on straight, as otherwise it would not be.

In my continuing opinion, I recommend fellow IPMS members buy and use this gear without concern, as it does work. (that goes for NON IPMS members too…)