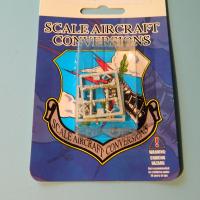 Consisting of two (that’s 2!) complete sets of gear, it’s pretty simple. Two main gear struts, two external torque links, and one tail gear. The tail gear is not the standard “Bar and lever” we see on so many early spitfires, but an actual oleo.

This set includes the torque scissors. It can be added as an afterthought to building, thereby preventing one from breaking it off during construction. Test fit into the wing and tail sockets to make sure no cleanup of flash is required, then a touch of superglue or epoxy, wait for the glue to cure, then you are done!

Even the simplest of modelers can do these. And as usual, the struts are much stronger than the plastic gear, and will allow you to align pitch, rake, toe in and out, etc. without fear of breaking off.

This SAC set adds the usual structural strength to the weakest part of most models: The landing gear. Cast tough yet malleable white metal, it addresses any concern for splayed and failed landing gear.

Do NOT Remove the Tab