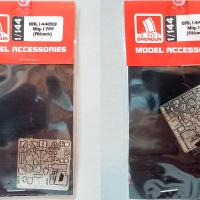 Attack’s 1/144 scale MiG-17s are nice little representations of the Fresco, but they are missing a key ingredient—a cockpit. Thanks to Brengun, the 1/144 scale community now has a two very nice photo-etch (PE) cockpit sets to correct this omission: one for the MiG-17F and one for the MiG-17PF.

Before starting, I will admit that my PE skills are not the greatest. However, the parts that required folding were clearly marked, and with the help of a couple razor blades, they were easy to bend and fold.

Brengun’s PE sets include almost everything need to represent either the MiG-17F or the MiG-17PF cockpit. The PE sets also includes the canopy deck, finely detailed landing gear doors, engine exhaust detail, and antennas. As far as I can tell, the only difference between the two PE sets is the instrument panel. It seems Brengun has taken the time to accurately represent the differences between the MiG-17F and MiG-17PF instrument panel. Regardless of which PE set you are using, both include a printed instrument panel that goes behind the PE part.

The PE does not completely represent the Fresco’s cockpit. For one, the cockpit has curved sidewalls, just like the MiG-15. In 1/144 scale this isn’t a big deal, and considering the kit’s lack of any cockpit, the PE is very suitable. Another issue is the lack of a PE part to represent the control stick or instructions explaining how to fabricate one.

When I was assembling my cockpit, I made a vac-formed canopy since the kit’s canopy is so thick. This proved very useful, as the Attack kit’s canopy is so thick that the PE cockpit would have to sit unrealistically low for the canopy to close. Therefore, I would recommend either making your own vac-formed canopy or buying Brengun’s vac-formed canopy. However, take note that the cockpit deck is sized to fit Attack’s injection molded canopy. Lastly, there are no color callouts, which is not that big of a deal. Grab your references and paint away.

These are nice little detail sets for the 1/144 scale Attack MiG-17s, and if you are building one, these PE sets will definitely come in handy. I certainly recommend them.

A big “thank you” goes out to Brengun for providing the review sample, as well as one to IPMS/USA for the opportunity to conduct this review.