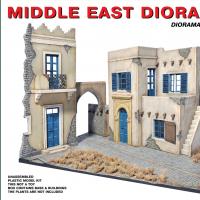 I must confess at the outset of this review that I am not, for the most part, a fan of vacuform diorama buildings. I will always prefer ceramic which is far easier for me to assemble and paint. That being said, I was quite curious to tackle this kind of project and found myself quite impressed with this kit.

My first impression of this kit came before I even opened the box. It was remarkably heavy - not what I’d expected of a kit that was largely vacuform parts. However, on opening the box I could see why – the nine vacuform sheets are quite stout, with remarkable detail on roughly 74 parts. The kit also comes with five sprues of injection molded details, making a total of well over 150 parts – far more than will be needed in this diorama. Everything you desire to create a large and detailed diorama is provided here, including the base. There is a LOT of plastic in this kit.

Okay, then, what specifically do you get? Essentially, you get the ingredients from two separate MiniArt buildings, a third ancillary building/structure connecting the two and a good-sized base. Details are extensive to the point that small portions of the interiors are provided. One is an elaborate complete structure, the second in ruins, but minimally so. All in all this is a complex and visually very interesting presentation of rather timeless Middle Eastern architecture.

That being said, it should be noted that this style of architecture is not much in evidence in news footage these days, so this diorama is really most suitable for everything from the Napoleon’s incursion into Egypt in the 18th century up to and including World War 2. The base provides enough space for a modest-sized vehicle or two (jeep to Stuart-sized light tank) and of course, plenty of space for figures. Anything larger would look a bit crowded, so this isn’t the best base for a Tiger tank maintenance scenario, for instance. Of course, the base itself is not essential to the buildings and they could be utilized on a larger base of one’s own making if you so choose.

Assembly is typical for vacuform parts. Having cut the pieces from the sheets, it’s always best to use strips of scrap plastic to create tabs for gluing the items together. In addition, the kit does have some small vacuform “pips” that will need to be sanded off some of the exteriors. Nonetheless, the sturdiness of the parts themselves will help in assembly work. Be prepared, as with any vacuform kit, to use a lot of putty in completing the model. I went through about 2/3 of a large tube. You have a wide choice of injected detail parts to dress these structures up with, and can enjoy some individualization of your diorama in this manner.

MiniArt continues to impress with their creative and highly detailed diorama accessories. This kit is no exception. Highly recommended.

I would like to thank MiniArt, MRC, and IPMS/USA for the review sample and would like to extend my best wishes to MiniArt and their employees during this difficult time for their country.