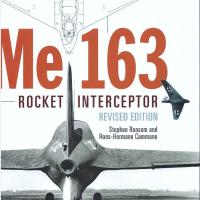 Stephen Ransom was born in Oxfordshire, England, and studied aeronautical engineering at the University of Salford. He was employed by various companies' advanced projects offices in the aircraft industry, and also worked for some time in the space industry. He has a deep interest in the history of British and German aviation.

Hans-Hermann Cammann was born in Celle, Germany. He grew up watching his father fly model aircraft as a hobby and took a deep interest in the history of the Me 163 and the men who flew it. He's become a regular guest at annual reunions. He was a serving officer in the Bundeswehr.

Crecy and Specialty Press have brought back a literal Classic, as in Classic Publications, in this revised edition of Me 163: Rocket Interceptor. Originally released in two separate volumes in 2002 and 2003, this essential history of the Komet has been long out of print. This revised edition contains previously unpublished photographs and additional research, including Allied post-war testing of the Komet.

This hard cover portrait book's cover features A.L. Bentley’s plan view drawing of V21, depicting the late Me 163B-0 production standard. This drawing is also available on page 230, along with many other scale views of the early prototypes. The middle photo depicts the Me 163A V4 piloted by Heinrich Dittmar. Flying over Peenemunde in early August 1941, the aircraft was still flying without an engine. The lower photograph from the rear is possibly Me 163B V30 W.Nr. 16310039 based at Brandis. Originally with the call sign of GH II, it was repainted with a new camouflage scheme and a new call sign of C1 02. The C1 code was in black and much smaller than the succeeding ‘02’ in white. This airframe was 75% damaged and its pilot killed on 22-Jan-1945 at Brandis. The rear cover features four black and white photographs and a color illustration. The upper photograph is either Me 163B V7 W.Nr. 16310016 or Me 163B-0 W.Nr. 440008. W.Nr. 16310016 was 98% destroyed on September 11, 1944 when the pilot Tegtmeier bailed out over Lohe. The call sign C1 11 was reassigned then to W.Nr. 440008. The lower photograph is from a Me 163 propaganda film showing a Me 163B flight line after a downpour. One can see that the aircraft are largely covered in tarpaulins for protection. The color cartoon of a Me 163B in flight is by Gefr. Gerhard Stolle who was well known for his humorous and serious drawings of the Me 163B, including the unofficial badge “Jamai”. The center photograph show Me 163B V35 W.Nr. 16310044 GH IN landing at Bad Zwischenahn. The center far right photograph come from Capt. W.J. Anderson’s P-51 gun camera. Although 50-caliber hits may have been made, the Me 163B was not shot down. The first thing you will notice upon opening the book are the exceptionally clear photographs gracing nearly every glossy page. I counted 907 black and white photographs, 48 color pictures, 309 black and white line drawings, and 26 color illustrations.

Stephen Ransom and Hans-Hermann Cammann kick off this tome with a discussion on the design elements that evolved into the Me 163 Komet. This includes a review of tailless, or flying wing aircraft. The first of these was a design by Herr Etrich (of Taube fame) and Herr Wels that was based on the Zanonia Macrocarpa seed. This unpowered glider was built and first flown in 1905. Other pioneers would quickly follow. Another design component was the rocket engine which is addressed in Chapter 2. Maximilian Edmund Valier would team up with Fritz von Opel to build a rocket powered car in 1928. The same year saw rocket powered aircraft models launch that quickly led to the first rocket powered aircraft, the Ente (Duck), making its first flight in June of 1928. Alexander Lippisch had designed this tailless glider, and along with Max Valier, Fredrich Sander, Fritz von Opel achieved the first rocket powered flight.

Chapter Three is a reproduction of Alexander Lippisch’s account on the development of tailless aircraft. Chapter Four gets you into the continued development of tailless aircraft like the DFS40 and DFS194. Changes at DFS led to Lippisch moving his team to Messerschmitt where the Me 163A would arise. Page 67 shows off just one page of A.L. Bentley’s scale drawings, this one focusing on the plan view with and without R4M rockets. Chapter Five is aptly named as the ‘Trials and Tribulation’ of the development and testing of the Me 163B Komet. This chapter is presented in a day to day accounting of the operational testing of the new interceptor by Erprobungskommando 16. Page 140 depicts the all-red painted Me 163B V41 prototype that celebrated the second year anniversary of operational testing as flown by Wolfgang Spate. Chapter Six addresses the Operational use of the Me 163B in JG 400 from March to September 1944.

Chapter 7 continues the Operational use of the Me 163B from July 1944 to April 1945 at Brandis. Again this is presented in day to day diary format and includes many first person accounts. Page 207 depicts some of the 33 demolished Me 163B Komets as the Allied forces enter Brandis airfield on May 6, 1945. This chapter ends with a photographic essay of Operations. These photographs include towing, take-offs, landings, and refueling. Also included is seven pages of detailed line drawings by A.L. Bentley of the Me 163B. Chapter Eight focuses on the operational use at Stargard and Huslum from October 1944 through May 1945. Page 245 shows a sequence of four photographs as Rudolph Opitz prepares to take off from Hussum. Chapter Nine, Bat Ships, addresses claimed Allied interactions with the Me 163B, except these claims were probably mistaken identity. Chapter Ten addresses the training issues that future Komet pilots faced. Interestingly, it is noted that Italian pilots were trained to fly the Komet. Unfortunately (maybe fortunately), all of the Italian pilots had to be evacuated due to the Soviet army advancing on the training base just before they got to fly the Komet. Chapters 11 through 15 address both real and paper variants. Page 320 depicts the Japanese variation, the MXY8 Akikusa training glider that would prepare pilots for the Mitsubishi J8M1 Shusui rocket powered interceptor. The final chapter, Where Did They Go?, addresses what happened to all of the captured Komets at the end of the war. The Chapters include:

There are a lot of sections that I found quite revealing, but I found the section on implementing a V-Tail on the Me 163B quite intriguing. Included are a photo of a Messerschmitt draft of a proposed design and photos of a V-Tail on Bf 109 V48 W.Nr. 14003. Despite not living up to expectations, the V-Tail was proposed for the Me 262 HG II. Professor Messerschmitt proposed the V-Tail in a patent application to resolve the Me 163B to improve vertical axis stability, especially when landing flaps were deployed. Wolfgang Spate was also a huge fan of the V-Tail version of the ME 163B and extolled its virtues in report after report. He even noted that a V-Tail was being manufactured in Augsburg and was to be immediately be placed into flight testing.

There is certainly no shortage of books that have been written on the Me 163B Komet, but this combined volume clearly leads the pack. There are many first person perspectives from pilots to give a rich flavor to the text. Combine that with the hundreds of photographs, hundreds of scale line drawings, and 26 color illustrations to show off the camouflage and you have an excellent reference. The bonus is that this not just a reference, but an excellent read. Prior to this combined edition, Volumes One and Two were fetching high prices on eBay. Now, if you act quickly, this essential book is once again available at a reasonable price. If you missed out the first time, make sure you don’t miss out this time.

My thanks to Specialty Press and IPMS/USA for the chance to review this great book. This combined edition can be ordered by calling Specialty Press at 1-800-895-4585 or by visiting www.specialtypress.com. Shipping and handling is only $6.95 from Specialty Press.