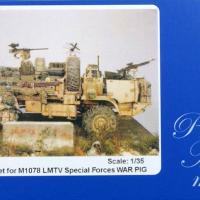 Prior to starting this conversion, I recommend gathering as many pictures of the “Warpig” as possible, as there are subtle differences between individual vehicles based on the preferences of the crews.

Construction of the donor kit (Trumpeter’s LMTV) begins with the chassis and suspension. This portion is straightforward with only a few added detail parts from the conversion. At each wheel, some extra brake (?) cylinders are to be added, with the brake cable to be provided by the modeler (I used thin solder wire). The Pro Art instructions are a bit vague regarding exact placement; I found the in-progress pictures on the Pro Art website to be helpful during this step (and during subsequent construction). Pay particular attention to the placement of the fuel tanks and tool boxes. You may want to fit the cargo bed first to get an idea of exactly where to place these components. You will note that the conversion does not include replacement wheels and, even though the instructions recommend buying the Pro Art wheel set, there are several wheel sets available (I chose the DEF Models product). There are additional chassis details too, including muffler details, oil tanks, and some nice detail touches for the spare tire – including antenna mounts. I did run into problems with the PE in this step because the PR sheet that I received was missing surface details as well as some fold indentations. As a result, I did end up using plastic stock throughout to replace these parts, including the PE tie-downs and come-alongs.

I then moved to the cargo bed and there are significant differences from the base LMTV. Pro Art provides the open grid framework on the bed via large PE pieces. The PE here was extremely easy to use and install. Final touches are the additional spare tire post and diamond grid steel plate added to the center of bed, as well as the 2 crew seats – I particularly liked the details on one seat with the addition of the Kevlar vest hung over the chair back. I added lead foil seatbelts as indicated in the instructions and added the supplied buckle details. A notable omission is the lack of the post mount for the main crew served weapon (or the weapon for that matter) that is a prominent feature on all LMTV Special Forces vehicles.

Construction then moves to what is the most prominent change on these vehicles, the chopped-down cab. The new side panels, doors, back, seats, and front (interior and exterior) are all supplied in a yellowish resin. I found the front grill and sides a bit fiddly to fit and I did have to set some shims to ensure a snug, gap free fit. I would suggest lots of dry-fitting to minimize assembly boo-boos later; learn from my mistakes, young Jedi. The new seats are nicely detailed and are a significant improvement over the kit parts. The scissor mount for the SAW and the weapon itself are included and installed in this step. The SAW on my example had quite a bit of flash and a badly bent barrel. As a result I opted to use a Live Resin product instead. The additional antenna mounts and post provided are crisply detailed and easy to assemble (take care with the thin PE blades as they can warp easily) – again, consult reference pictures because the number, type, and location of these units vary based on individual vehicles. The last pieces added are the mount and box for the prominent radio system of this SF vehicle. The PE mounting posts were poorly formed, missing the fold marks which meant they needed replacement with plastic stock.

That’s it, the conversion is done and it doesn’t quite look like the picture on the box. And here is the rub as far as I am concerned: this conversion kit is not complete, requiring additional Pro Art sets to complete the base SF vehicle. The omission of the stowage is understandable and Pro Art does provide some nice sets for that purpose. However, the rear weapons mount, machine gun (or Mk.19 grenade launcher), and radio/computer sets are common to all Special Forces LMTVs; I don’t agree with the marketing strategy that requires the modeler to purchase additional sets to complete any conversion on any particular kit. That aside, the conversion was reasonably easy to assemble, well detailed, and looks the part. I am looking forward to finishing it up with the additional stowage and equipment.

I’d like to thank Pro Art Models for the review sample and IPMS/USA for the opportunity to review it.