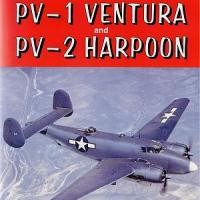 Soft cover, 192 pages of black and white detail drawings and photographs covering both of these aircraft and their varying roles in Naval as well as civil service.

This book starts by covering the aircraft’s beginnings with the predecessor Lockheed (Electra) 10s, (Electra Junior) 12s and (Super Electra) 14s, and segues on to its wartime role as a patrol bomber used not only in England, but in the U.S. Navy as well.

As with most Ginter books, the research touches on all serial numbers manufactured, and traces them to their assignments. This was a particular interesting read for yours truly, in that I hold a type rating in this venerable old bird. In the closing pages of this book, I was able to trace by registration number the two birds I had the pleasure to fly. I was surprised to see just how many of these post-war relics made their way to Cleveland, Ohio. On the last two pages you will find excerpts from the factory performance charts for these aircraft as calculated at varying gross weights. Missing however, are the “engine out” performance specs. (Lockheed was probably afraid to publish them!) This really brought back memories. My original instructor informed me that at gross weight, with one engine failed, the good engine would get us to the scene of the crash…maybe. In any case, if you’re a Naval Aircraft buff, this one’s definitely worth having. And if you’re a modeler, there’s a modeling section towards the back of the book including abbreviated reviews and photographs that cover all the Ventura offerings in 1/32nd and1/48th as well as the 1/72nd scale releases in various versions from Academy, Special Hobby and Fonderie Miniature, and lastly the 1/72nd Rare Planes VacForm kit.

Many thanks to Steve Ginter for the review sample.