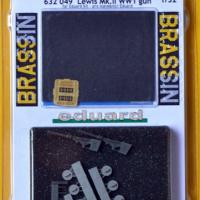 In this BRASSIN detail set, Eduard provides modelers with everything needed to build a pair of highly realistic Lewis Mk.II machine gun that will add detail to any 1:32 scale model of a WWI Allied aircraft that carried one or two of these iconic weapons. The set consists of 14 resin and 4 photo-etched brass parts. Each gun is made up of five resin parts and one photo-etched part. The additional resin parts provide a pair of spare ammunition magazines and the additional photo etch parts are extras of the little one that folds up into the gun barrel site (because Eduard expects some of these very small parts will find a way to disappear in the carpet monster…as mine did). The level of detail in each component is impressive.

A folded full-color instruction sheet (pictured below) is included that provides all information needed to assemble the parts into these highly detailed models of the type of Lewis gun that had a barrel with a cooling jacket (often found mounted on an SE5a or on numerous two-seat reconnaissance aircraft). The assembly process is not difficult, but preparing the delicate parts does require a bit of care. I recommend washing the resin parts in warm soapy water before doing anything else. Each of the resin components comes attached to small casting blocks that must be removed (a razor saw and #11 blade will do the job nicely). The photo-etched part that makes up the barrel site is very small and easily lost if not carefully handled. I recommend rocking a #10 blade over the attachment points to remove it from the fret and placing it on the sticky side of a post-it note to keep it from pinging into space.

Assembly simply involves attaching the resin parts and adding the brass gun site after it has been folded over itself two ways. Obviously, everything must be assembled with superglue or 5-minute epoxy (I used superglue). One of the photos below shows the parts assembled and ready to paint. Another photo shows the finished model painted following the information provided in the instruction sheet.

This BRASSIN set will build into a pair of very nicely detailed Lewis Mk.II WW1 guns. It is highly recommended to modelers who would like to add a higher level of detail to their next 1:32 scale WWI aircraft. My thanks to Eduard for providing the review sample and IPMS/USA for the opportunity to assemble and review it.