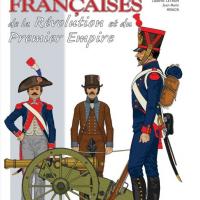 If you’re a serious figure modeler and have a thing for the incredibly colorful and resplendent uniforms of the Napoleonic Wars, this book from the series should get your attention. One of a range of large-format books by this publisher, it’s a virtual cornucopia of detail and information regarding the artillery arm of the French Army from 1786 through 1815, when Napoleon met his own “Waterloo.”

The entire book is in French and offers no subtitles, although this won’t be much of a deterrent to any serious modeler as the book is almost exclusively color plates anyway. These cover literally every aspect of the French Artillery arm including ALL uniforms, equipment and ordnance. If you have access to the excellent Historex range of kits, much of what you find in this book will be reproducible, including the forges, wagons, and other equipment used, plus a lot of stuff I’d never seen before. I didn’t know, for instance, that the artillery arm made pontoon bridges. Fascinating!

Although the book offers no table of contents or index, I used my meager high school French to translate the various sections, which are:

Speaking of the uniforms themselves, the artillery branch was always one of the more somber units, as moving and firing these breach loaders was an incredibly filthy job. Nonetheless, I was surprised to see some real splashes of color even here. I can’t for the life of me imagine how they managed to keep themselves clean, but there you are.

As a lifelong figure modeler, I’ve often found it extremely frustrating to locate good solid documentation. Oftentimes uniform books will provide essentially “samples” of the uniforms depicted rather than full-on detail. This book literally misses nothing. It shows rank designations, unit distinctions, rifles and swords, undress uniforms, campaign variations, ammunition storage – everything. Nothing is left to puzzle out. I honestly don’t think I’ve ever encountered a more thorough and complete depiction of military costuming ever. Having said that, I’m now going to have to save up my pennies and buy the rest of the series. They’re that good.

Be prepared to be impressed. I cannot recommend this book, nor the rest of the books in this series, highly enough. They are literally without peer. My thanks to Casemate Publishing and to IPMS/USA for a chance to review this remarkable book. Thanks!!