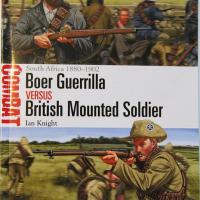 This title is from Osprey’s well received Combat Series of books. It is number 26 in the series.

Waged across an inhospitable terrain, which varied from open African savannah to broken mountain country and semi-arid desert, the Anglo-Boer wars of 1880-81 and 1899-1902 pitted the British Army and its allies against the Boer Commandos. Independent and individualistic, the Boers were not professional soldiers but a civilian militia, expert shots who moved on horseback but dismounted to fight. Although the British Army’s initial over-dependence on conventional tactics led to a string of Boer victories, the British experimented with mounted infantry units of their own, melding the benefits of regular cavalry mobility and discipline with the advantages of fighting on foot. This fully illustrated study reveals both sides experience of combat in two savage conflicts, from the initial Boer victories of 1880-81 through to the final battles of 1900-02.

These books are great reference materials for modelers! This book consists of:

The introduction gives a detailed description of who the British and Boers were, with an overview of the major battles and maps.

The Opposing Sides has a much more detail about who the British were and why they came to South Africa. There is also much more information on the Boer’s (Dutch Immigrants to South Africa) and how they came to be in South Africa. There is a detail review of the standard British Army equipment and tactics in common use at the time versus the Boer’s equipment and tactics. There are some really nice black and white photos and colored paintings showing the opposing sides in the field to give you an idea on how ruff the environment really was.

Next is the overview of three major battles at Ingogo, Bothaville, and Modderfontein. The overviews include background information, battlefield environments, and combat maneuvers. Placed throughout this section are black and white photos and paintings giving you the feelings of desperation as each side sought to win the battles.

The Analysis chapter is an unbiased review of the opponents and battles of the Boer War. At the start of the war the British totally underestimated the Boer’s capability to wage war and their tactics. During the course of the war the British had to adapt to Boer tactics to achieve any success at all, namely the adaptation to mounted troops. In the end it came down to a war of attrition with the Boer’s being unable to resupply. Also the British bitter tactics of burning Boer farms and relocating noncombatants to camps lead to thousands of deaths from disease and malnutrition.

My thanks to Osprey and IPMS USA for the opportunity to review this great book.