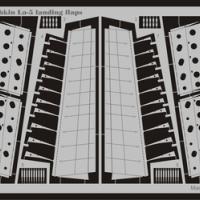 While it’s primarily remembered for the massive clash of armor on the ground, the battle of Kursk was also the debut a new Soviet fighter that would eventually help wrest control of the sky from the Luftwaffe’s Fw190 and Me109. That was the Lavochkin La-5/7 series of fighters. An offspring of the earlier LaGG-3 fighter, the La-5 was born when the inline engine of its protégée was replaced by a 14-cylinder M-82 radial engine. In spite of early teething problems that resulted in a redesigned cowling and the reduction of armament to 2 x 20 mm ShVAK cannons, the La-5 proved more than a match for the heavier Fw190A-4/5 series. The La-5FN was equipped with a fuel injected M-82FN radial, further improving its performance. Many Soviet aces, including Ivan Kozhedub (62 kills) and the subject of this built, Capt Pyotr Likholetov (30 kills), added to their scores flying the LA-5/7 series fighters.

The Kit and Aftermarket Sets

I purchased this kit with fingers crossed at my local hobby store. In my experience, Russian-made kits are a bit of a gamble, spanning from a chunk of plastic to what we have here – a kit that stands up, for the most part, to most modern kits. There are 110 parts molded in grey plastic, and a tree of clear parts. The airframe parts are amazing. There are very refined recessed panels lines and full interior parts, including an engine, cockpit, and structural framework. This is a detailer’s dream. Two areas of the kit that don’t quite measure up are the clear parts and the decals. The canopy surface is rough and the decals in my sample were yellowed and a bit on the thick side. I used the canopies but replaced the decals, as I’ll explain later.

The Eduard PE sets are both the excellent quality we’ve come to expect. The flap set requires removal of kit flaps and thinning of the upper wing interiors. Included are full details for the underwing section, including ribs. Flap sections fold into three-dimensional representations of the real thing. The only addition required is some wire to represent the torque tubes that feed through holes in the ribs. It looks daunting but goes together fairly easily.

The other Eduard PE used is the pre-colored “Zoom” pack. This includes an instrument panel and seat harness plus various other details for the sidewalls and cockpit in general.

Tiny resin hollow gun barrel ends and a pitot tube replacement make up the Quickboost set used on this build.

This build didn’t progress in the normal way. I bought the kit and had started it when the detail parts came up on the review list. I had to work a little harder than you’ll have to if you collect all these things in advance. The engine and cockpit framework are first up. The engine is a gem. Every exhaust pipe is a separate piece and very convincing when assembled. Dry fit, so you know exactly how things go before you glue those parts. The cockpit floor sits on the bottom wing section. If you use the flap set, you’ll want to cut the flap sections out at this point and thin the upper wing sections at the rear. I had already glued my wings together and that complicated the flap installation. Same goes for the Eduard Zoom set cockpit parts. Eduard gives you a lot of nice placards, panels, and a throttle quadrant that really dress up what is a very good cockpit right out of the box. The Eduard instrument panel is the centerpiece of the set. Make sure all the parts inside the fuselage halves are pushed into the recesses. Not doing so will cause problems with the cowling fit later. Speaking of which, the cowling sections in four parts trap themselves around the engine. I would suggest aligning the top and bottom and the sides. Two nice cannons come in the kit. Quickboost does not provide directions for the gun barrel ends, so I cut back an amount equal to the part length and glued the resin parts on the ends. Zvezda molded all the control surfaces separately, including the slats, so you can pose them any way you like. I tacked all the cowling and canopy parts with white glue in preparation for painting. As I said before, the canopy is the weak spot in the kit – not particularly clear or smooth. I did my best with some polishing cloths and a dip in Future to clear them up. The fit is not that great, either. An aftermarket replacement is really needed to match the quality of the rest of this kit.

The kit does provide a color chart cross-referenced to Model Master, if you so chose. After reviewing several reference books (see list at end of this review), I decided to mix my own colors for the top and used Model Masters “Russian Underside Blue” underneath. The rudder and spinner are white on this subject. I used Tamiya white primer for that. In preparation for decaling, I oversprayed the model with Alclad’s Aqua Gloss (AC 600). I followed the directions and the results are a smooth glossy surface ready for decals.

The kit decals in my example were thick and yellowed. I did test one to see how it worked and was surprised that it conformed very well. I elected instead to use Aero Master decals 48-009 “Red Stars in the Sky”. This set includes some cool markings for a Soviet Spitfire, Hurricane, two I-16s, a LaGG-5, and my subject, Capt. Likholetov’s La-5FN “silver 15”. Application was straightforward. I used Microset to apply them and the only issue I had was splitting a couple when I repositioned them (my problem, not the decals.) I used Bare Metal Foil on cowling strips and overcoated that with some flat lacquer to deaden the shine.

While I waited for everything to dry, I assembled the exhaust stubs. This takes little forethought, as the pipes are individual parts and, with all the bends, it’s like putting one of those puzzle rings together. The fact that you end up with aligned exhaust ends is a testament to the thought put into the design. The Eduard flaps were mounted and the actuators installed. Next, I tackled the cannons and cowling. I was disappointed to discover the upper cowl will not fit over the cannons. After all that work, I cut off the rear portions and left the barrels, since they are visible with side cowls off. I finished the cockpit by adding the gun sight and PE iron sight from the Eduard set. The clear parts were mounted next. The windscreen fit was dismal and I had to fill gaps with Microclear and paint them. The nav lights are tiny clear parts, a nice touch. Last were the stretched sprue antenna and landing gear position indicators on the wings, and it’s a wrap.

First I would rate this kit an 8 on a 1 to 10 scale. The level of detail is simply amazing, but the kit is really let down by the canopy and the decals. Even with those flaws, this is a great kit. As for the Eduard Flap set and Zoom cockpit details, I give a 10 out of 10. The flaps look very realistic when complete. I had fit issues, most likely related to my incorporating them into a partially built model instead of at the beginning. The Zoom set is worth the money just for the instrument panel and seat harness. Both are superior to what I could have done. The Quickboost parts also score a 10 out of 10. Well cast and easy to remove from the cast blocks, these parts are a welcome addition to the kit.

Thanks to Eduard and Quickboost for adding just the right touches to a great kit. A very special thanks to Eduard, Quickboost, and IPMS/USA for the parts and their patience to allow me to incorporate all these goodies on the Zvezda La-5FN for you to see.