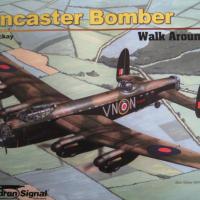 The Avro Lancaster was probably best known for the bombing of the Ruhr Dams by the 617 Squadron of the RAF which was known as Operation Chastise. This squadron was to become known as the Dam Busters. However, the Avro Lancaster was to become one of the main heavy bombers of the RAF, which first saw service in 1942. It became primarily a night bomber but among its other attributes it was an excellent daylight precision bomber. It served between 1942 and 1945 and flew over 156,000 sorties.

As with many other Walk Around books which Squadron Signal Publications publishes, this one also gets into the body and soul of this awesome aircraft. The 80 pages contained in this soft covered book are illustrated with 200 photographs, plus color profiles and detailed line drawings. It features three Lancasters, the first being a Mk.X which saw active service in WWII and “lives” in the Imperial War Museum at Duxford. The second is a Mk.VII which was built too late for active service but is kept in running condition at East Kirby, England. The last one, designated PA474, has not seen active service either but is still seen flying with the RAF’s Battle of Britain Memorial Flight show.

This book takes you into the “belly of the beast” and shows almost every detail of this aircraft that a modeler would need to build a precise and detailed model replica.

I cannot recommend this book enough for anyone who has the need to inquire about a part or section of this aircraft. It is also a valuable addition to anyone who is into the history and transitions of this awesome aircraft. I also want to add that the value of this book cannot be matched to the low price of this book.

I would like to express my thanks to Squadron Signal Publications and to IPMS/USA for letting me review this fine book.