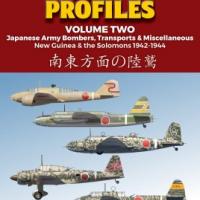 The Author: Michael Claringbould spent his formative years in Papua New Guinea in the 1960s, where he became fascinated by the many WWII aircraft wrecks which still lie around the country. He has served overseas as an Australian diplomat including South East Asia and throughout the South Pacific where he had the fortune to return to Papua New Guinea for 3 years starting in 2003. Mr. Claringbould has authored & illustrated various books (at least 15) on Pacific War aviation. His history of the Tainan Naval Air Group in New Guinea ‘Eagles of the Southern Sky’ received worldwide acclaim as the first English-language history of a Japanese fighter unit, which was also translated into Japanese.

This book covers 9 Sentai’s plus HQ, Recon, Transport & Liaison units and where they were based during this campaign. The main aircraft covered in this book are: Mitsubishi Ki-21 I & II Sally, Mitsubishi Ki-46 II Dinah, Kawasaki Ki-48 II Lily, Nakajima Ki-49 I & II Helen, Mitsubishi Ki-51 Sonia, Kawasaki Ki-58 Thalia and the Mitsubishi Ki-57 / MC-20 and MC-21 Sally transport. With 66 B&W, 12 color photos and 22 pages of color profiles (covering 100 different aircraft), if you have any of these kits in your stash, you’re going to have quite a few ideas to help with your build.

Each chapter has a short history of the units but is well researched and even includes when possible names of unit commanders and some of the pilots. This book is well written and a very easy read and is a welcome addition to any library…..mine especially, since I recently picked up Ki-21 and Ki-49 kits.

I highly recommend this book for anyone with these aircraft in their stash or anyone with an interest in JAAF units in the South Pacific.

I’d like to thank Casemate publishers for providing this book and the review Corps for letting me review it.