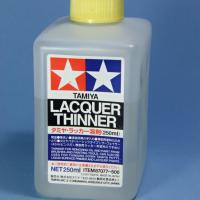 Tamiya has long offered a wide range of acrylic paints and acrylic thinners. Recently I experimented with Tamiya’s Lacquer Thinner, item # 87077. As a rule, I tend to use the paint thinner produced by the same company that produced the paint being used.

I found that the Tamiya lacquer thinner worked very well, indeed, although its use is different than the acrylic thinner I’m used to using. Do not let the fact that it is a Lacquer thinner dissuade you from using it with your standard Tamiya acrylics. It works just fine.

The lacquer thinner is noticeably “stronger” than the acrylic thinner, both in how it interacts with Tamiya acrylics and how it smells. And it should be said here that if you can smell the paint you are airbrushing then you should wear a mask. Also, users are strongly advised not to have an open flame nearby as lacquer is combustible.

Using the same compressor settings that I used with acrylic paints, I found that the lacquer-thinned paint laid down with a distinctly more “glossy” appearance. I found that the paint went through the airbrush a little smoother, although this could be due to the cleaning that I gave the airbrush before use. If you’ve ever used Tamiya’s rattle can Gloss Black, TS-14, then you will understand that the paint being used had a “harder feel”, once dried, than do most of the Tamiya acrylics I use.

Decals went on well, and it may be my imagination but the lacquer-thinned paint didn’t need as much polishing out prior to decaling as I am accustomed to.

Checking Tamiya’s webpage which features this product, there are some claims made. I found that these claims were supported by my experience with the product.

Those claims I checked out are:

I had no reservations about using Tamiya Lacquer Thinner. Tamiya has a long history offering useful products and I was not disappointed with the lacquer thinner. I have found that I tend to use the lacquer thinner when the paint-job is more complex, without hard lines between the colors, while I tend to use the regular Tamiya Acrylic Thinner when the color scheme is more of a single color, or with hard demarcations between colors.

Look for that distinctive yellow cap! I highly recommend this product and repeat the admonition that a mask should be worn when airbrushing paints thinned with it. Thanks to Tamiya for making this product available to IPMS for review.