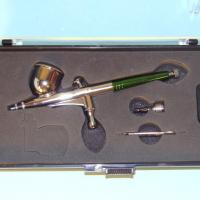 Two more green machines added to the arsenal. The basic kit included the Genesis XG ( $149.98) airbrush with a 7ml cup capacity, .3mm nozzle, and weighs in at 4.2 OZ. To assist with consistent line widths, the Genesis has a Pre-set knob at the back of the airbrush rear handle cap. Turning is clock-wise limits the trigger and how much amount of paint sprayed. Turning it counter-clockwise, allows for more/unlimited paint and trigger extension. Just the feel of the airbrush lets you know it's solid. The balance is very nice as the rear handle cap is all metal. Not plastic like some other airbrushes in its price range of $120. Grex also makes the comfort grip set that can be purchased separately for a more ergonomic/comfortable feel.

Again, I had to use the #AD14 adaptor to hook the airbrush up to my Badger set up. After getting the airbrush hooked up and running, I filled up the paint cup and commenced to spraying. I started out attempting basic airbrush strokes, which the Genesis trigger was not very responsive out of the box. However, trying to get a smooth transition from a hairline to a wider spray proved difficult for some reason. Even after working with the adjustment knob at the back of the airbrush (this could've been due to a paint mixture issue also). I put my compressor down to about 8lbs of pressure, and the airbrush gave a dotted line pattern and spattering. After turning up the air pressure, the consistency of the pattern greatly improved. I used the same paint mixture with the Genesis as I did with the Tritium G3 unit so not getting the same consistent results puzzled me. Adjusting the spring housing inside the handle loosened up the trigger a bit for smoother control and corrected the problem after a bit of further trouble shooting. The gravity-feed style also atomizes the paint better for finer details and control which is nice for working on small subjects. I've really come to enjoy it specifically for when I need to mask off and spray small areas on models like weather stripping around windows and such.

Overall, the Grex Genesis performs well, though lower air pressures caused some inconsistent spraying initially, trouble shooting fixed the problem. Under higher air pressure (12-20lbs), the brush worked beautifully with great control for small area masking and painting. After I got the airbrush "dialed in" it's worked beautifully. I use it almost exclusively for everything, but it really shows its true merit when masking and painting small areas. The $120 price tag is on par with other makers out there, and I would recommend it. The only downside is the tip/needle is not interchangeable with a smaller size. Thus I had to buy the Genesis XN with a .02mm needle/tip for smaller applications.

Moving forward to the Genesis XN ( $139.98), it's very well identical to the XG with the exception of the .02mm tip and a smaller 1.5ml paint cup and 2.9 oz. I bought it for the soul purpose of fine detail work on models, and artwork. The .02 tip and low air pressure allowed me to very effortlessly practice spraying "real fire" flames with a free-hand stencil on a 1/24 scale car. The dual action trigger is very responsive and the light weight of the unit makes working with it very effortless. The only down-side again is the lack of being able to interchange a needle and tip size. The price is also in the $120 range, like other units in its class. Overall, the Genesis line of airbrushes is very nice. The dual-action triggers are smooth, and the cleanup is quite easy. Best of all, they can be used with a multitude of paint mediums so if you spray enamel, urethane, lacquer, acrylics, they are all OK to spray with the Grex.