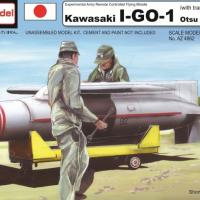 Designed in 1944 by Kawasaki, the Ki-148 was a World War II Japanese guided air-to-surface missile. In a nutshell, it was a radio-controlled bomb powered by a rocket engine capable producing 330lbs of thrust for up to 80 seconds. Approximately 180 were built. Luckily, none saw service by war’s end.

My sample arrived in a somewhat flimsy box. The box top featured a helpful rendering of the missile. On the reverse side, three decal options were presented, with the latter two being what-ifs. The plastic is a short run offering and lacks the finesse of standard production run kits. The kit includes plastic for one missile and one trolley cart. Also included are one small photo-etch fret, an instruction sheet, and a small decal sheet.

I started with removing the parts from the heavy sprue and test fitting them. It wasn’t long before I realized that this simple kit wasn’t going to be a cake walk. The missile halves were a little misaligned, required clamping to help straighten them out, they also required a lot of putty and rescribing. Not to be outdone, the main wing halves proved to be a struggle, too. Again, putty was needed to fill in the joint seams. The tail pieces have poor construction design, leaving the modeler guessing as to where exactly to set them. Only after a careful close-up inspection with a large magnifying glass did I detect faint outlining showing where they should go. Nonetheless, the plastic tail pieces were very challenging. A two-piece photo etch fin finishes out the bottom side of the tail. The cart is simple with basic construction, but it’s way too clunky and requires some sanding to make it presentable. The decals went down great but I’ll warn you, the red stripes on the nose are three separate decals, not one, and I found this out the hard way.

I like it! It’s one of those overlooked “cool” little models. I recommend it to the more experienced modeler due to the nature of limited run kits.

Thanks to UMM-USA for supplying the kit and IPMS for allowing me the opportunity to build, review and present such a fine model.