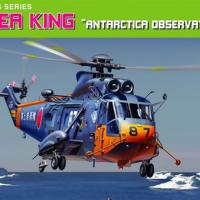 Previously, Cyber-Hobby released a 1/72 scale plastic kit of the American-designed Sikorsky SH-3D Sea King helicopter. At first, this twin-engine SH-3 Sea King was used primarily for anti-submarine warfare (ASW) by the US Navy. Many other nations adopted the Sea King design, including Japan, where it was license-produced by Mitsubishi. The Japan Maritime Self-Defense Force (JMSDF) widely used the Sea King as an ASW platform. Some 18 S-61A Sea Kings were used in search-and-rescue (SAR) roles too. Sometimes these were deployed to Antarctica aboard naval icebreakers. Japan maintains stations in Antarctica, and the JMSDF is responsible for Japan's Antarctica Observation activities.

Cyber-Hobby is providing a kit of an S-61A in Antarctica Observation service with the JMSDF. With the provided Cartograf decal markings and a suitable paint scheme, this S-61A variant of the Sea King could be ready for action in the frigid climes of Antarctica.

When I opened the box, I found the usual separately bagged sprues in light gray and clear. There were a lot of parts! Examination of the illustrations on the kit’s instruction sheet showed that many of these were not to be used in building this variant. But, as we shall see, they came in handy.

Paint colors on the instruction sheet are expressed for Mr. Color and Gunzy. There is a table in the instructions to read for conversion to Model Master products. However, on the paint & decal view illustration, there are notes for colors not on the table and colors on the table that are not on the layout. There are no colors noted for the interior, which ought to be painted before assembling the fuselage halves. A search of the Internet yielded information to decode some of the unexplained color notations. By representing a dark gray paint scheme on the markings diagram, the placement of many of the small decals were very difficult to see. If you are a fan of placing the accurate, but small, “No Step” type of markings, you will find plenty here. Overall, the decals were easy to handle for their size and fit well.

Step 1 is to assemble the pilot and co-pilot seats and then the cockpit. The attachment locations are not clear in the instructions. As with many aspects of this kit, there are quite a few “Fiddly bits,” but no lap straps were provided for the aviators.

The instruction sheet panel for the cockpit has both pilot and co-pilot’s collective control on the interior side. This puzzled me. I double checked my memory with an image search and found that, on an actual Sea King, like most rotary wing aircraft, only pilot ‘s collective (right seat in a helicopter) would be interior, and typically have more controls. Both collectives would be by aviator’s left hand. I had already installed the delicate part and did not correct the placement.

A note on the molding of the parts: I found the parts to be generally free of flash and the pour plugs easily dealt with. The casting is quite elegant on small parts and fine scale. The drawback, at least for a modeler of my modest abilities, is that these parts tend to break and can be difficult if not impossible to mend. Panel lines are crisp and other details are well represented, but the same fine-ness creates small and fragile parts (some as easily lost as many photo etch items on other kits).

The builder will want to assemble the cockpit, crew/cargo compartment and paint the interior before gluing fuselage together. There are many holes to made to accommodate portholes (windows?) and to anchor parts. My guess is that this allows one mold to be used for several variants of the chopper.

While dozens of holes are to be opened by the modeler, yet part A10 on port engine housing has two pins, but only one hole was opened for it. The searchlight assembly (A12, A17, A18) doesn’t fit the three holes required on port side. In trying to make adjustments to attach this sub-assembly, the legs broke and defied replication with stretched sprue, brass rod or plastic rod. The diagram of holes to be drilled did not include the dozen or so necessary for a strong and correct placement of the four exterior mirrors. Therefore, not attached.

A graphic on the instructions showed that two portholes (windows) to be opened on the sides of the fuselage aft of the existing ones by modeler. Ok for me; I have tools. Younger/ less experienced hobbyists (or having fewer accumulated tools) might have difficulty. Instructions called for opening an extra window/port per side, but later in the instructions no such opening is shown. No clear parts were provided for these openings. After trying to fabricate jury rig ports, I used parts that were for some other variant and showed on the instruction layout as “not used.” After much shaving and sanding, now they are “used.”

One of the faults I have seen in other helicopter kits is the lack of the distinctive “droop” of long rotor blades at rest. Cyber Hobby has solved this, apparently with realistic rotors requiring nothing more than assembly. Several sets of rotor blades are provided for different poses. It is possible to pose them folded as the bird is snugged down for hangar or flight deck stowage.

I can imagine many possibilities would offer an experienced model builder for posing this widely employed helicopter with the options hinted at in this kit. Marine One, maybe?

Thanks to Cyber Hobby for providing this kit for review and to IPMS for the opportunity to work with it.

Under Construction
Previous Next