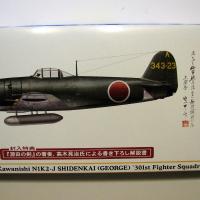 The N1K was originally developed as a floatplane for forward land bases but by the time it entered service Japan was on the defensive. Kawanishi engineers had proposed in 1941 that the N1K could be a formidable land-based fighter too and a land-based version N1K1-j (J indicated land based fighter modification of the original floatplane version) was produced as a private venture by the company and first flew in December 1942. Due to it being a mid-wing design (because of the floats & large prop) a new design was begun just 4 days after the first test flight. The major defects being addressed were the wing and long landing gear. The wings were moved to a low position, which permitted the use of shorter, conventional undercarriage, the fuselage was lengthened and the tail redesigned. The first flight was on January 1944 and production of the N1K2-J "Shiden-Kai" (Kai standing for Modified) started in April of that year.

Upon opening the box you are presented with 4 large sprues of grey and 1 of clear plastic, a nicely printed decal sheet, an 8-page instruction foldout and a 4-page foldout on Petty Officer 1st Class Tomokazu Kasai which is unfortunately in Japanese so I have no idea what it says. The plastic is cleanly molded with no noticeable sink marks and little to no flash. The clear parts are very clean and the decals are in register.

Starting with the well-appointed cockpit tub (19 parts are used for this) you will have 12 steps to complete this kit. Steps 1-4 deal with Cockpit, fuselage and wings. Everything here fits together well and I had no problems. Steps 5 & 6 have you assembling the landing struts (7 parts per strut) and nicely detailed (12 parts) engine. Once these are finished you can attach them to the aircraft. A nice option here is that Hasegawa gives you a choice to have the cowl flaps posed open or closed.

Next up are the final bits including the flaps, which can be posed extended or not, external tank, canopy and prop. Two parts I did not add are E 43 & 44. These are the wing root retractable steps and Hasegawa molded them in the fuselage but also gave you these two parts. I did not realize this until after I had painted the model and didn’t want to risk messing up the paint for some minor surgery (to me it looks goofy to show them extended with no corresponding cavity) so they are staying off. One item I didn’t like was that the spinner is made up of two parts as I always have a “fun” time cleaning this seam up.

I used Tamiya paints on this kit, AS-12 (Bare Metal Silver) on the underside and XF-11 (J.N. Green) for the upper surface. The decals went on easily and with some Solvaset set done well. Markings for two aircraft of the 301st FS are provided.

Compared to the original Hasegawa N1K2 kit (circa 198?) which was a good kit, this one is much better. This is a very nice kit with good detail out-of-box that goes together very easy. I recommend this kit to all modelers except true beginners.

I would like to thank Hasegawa & Hobbico for supplying this kit, the review corps for letting me build it and all of you for reading this……..Now GET BACK TO THE WORKBENCH!!