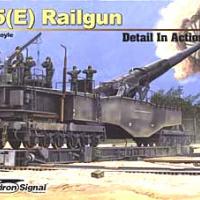 After the American Civil War, the railroad gun became a common weapon system throughout Europe. They provided a rapidly deployable heavy artillery gun that could defend a coastline or bombard enemy positions and fortifications. By the end of World War I, these guns grew in caliber and popularity. In the 1930s, Hitler initiated several programs to develop and procure more of these systems. Krupp initiated its own design and this program resulted in the" 28cm Kanone 5 Eisenbahngeschutz." The name is often abbreviated to 28cm K5 (E) (Eisenbahngeschutz means railroad gun) and 24 examples, the largest quantity of any rail gun, were produced. They were initially deployed along the English Channel to support the invasion of Britain. After this aborted event, they were deployed on all fronts to support other actions.

Two primary variations of the K5 (E) were manufactured, the Ausf C and Ausf D. Today. only one example of each remains. The Ausf C was captured by US forces outside Anzio, Italy, thus being given the name "Anzio Annie," and returned to the US for evaluation. It ultimately ended up as a museum piece at Aberdeen Proving Grounds in Maryland. The second gun, an Ausf D, has been put on display at the Batterie Todt at Musee du Mur de l'Atlantiquein, Audinghen, Pas-de-Calais, France (a long name for the Atlantic Wall Museum).

As a set standard for Squadron Signals Books of this type, this is primarily a photographic study, with very little text other than the captions for the photos. However, the captions are extremely specific, knowledgeable, and lengthy enough to give the reader a thorough understanding of what's in the photograph.

The first 25 pages contain 50-plus World War II vintage photos and are arranged from 1 to 4 photos per page. Most of the photographs are crisp and sharp, giving the modeler many detail and action shots. These historical photos show the K5 (E) in a wide variety of poses. The most noteworthy in my opinion are the action shots on the Vogele Turntable.

The remainder of the photos show closeup photos on every aspect of the gun that a modeler would want. They are equally divided between the Aberdeen (Ausf C) and the French (Ausf D) guns. The only differences I can see between the two versions are the ammunition trolley tracks on the loading deck. The C is single while the D is double-tracked.

This book will be of extreme value to big gun aficionados and modelers alike. The many fine photographs will assist in superdetailing by builders, as well as give the diorama crowd some great ideas. The photographic and text qualities of this volume are up to Squadron Signal Books' usual standard of excellence. I wish it would have been released several years ago when the K5's in 1/35th came out. It would have provided a valuable resource then, and it will still do so to any future builders.

I HIGHLY recommend it.

Many thanks go out to Squadron for providing this excellent reading material and to IPMS/USA for letting me have the opportunity to review and read it.