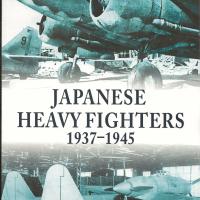 When most aviation enthusiasts and modelers think of heavy fighters, the image of larger, usually twin-engine aircraft such as the Bf-110, P-61 or Bristol Beaufighter come to mind. In Japan during WWII a heavy fighter designation meant an aircraft that were armed with large caliber machine guns and/or cannons. So, several small single engine fighters were considered to be “heavy fighters.”

There is a wealth of information in this book! Something that those of us who have had a long running interest in WWII Japanese aircraft can appreciate. In the last century small snippets of information could be gained from the translated captions in Koku-Fan, Japanese books or the rare Japanese book that was translated into English.

Another bonus is the substantial number of photos, many of which are new to me. Since some of these are lesser known (I was unaware of the A8M design) the fact that photos of the actual aircraft or mockup is a significant improvement over older publications, as is the detailed information on the various guns and cannons used in Japanese aircraft of both services.

Thankfully for the modeler, quite a few of these are available in kit form from producers of injection-molded, resin and vacuform kits. Many of the protype aircraft were produced in 1/48 resin by Japanese kit maker Raccoon in the 1980s and 1990s. Though quite rare these days they can still be found at swap meets, on eBay or Buyee in Japan.

I recommend this book to anyone with an interest in Japanese WWII aviation, aircraft, and aircraft weapons as well as the modeler; all will find something of interest in these pages. This book presents a valuable opportunity to learn information that has not been available before. I really enjoyed this book! My thanks to Casemate for the review sample and to IPMS for the opportunity!