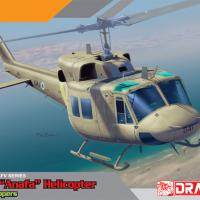 Dragon has recently released a 1/35th model of the much used IDF UH-1N “Anafa” Troop transport helicopter. As a bonus, they have included a set of their Israeli Paratroopers – a figure set which was, I believe, the second set of figures released some decades back by the then-new Dragon Models, right behind their Soviet “Spetznatz” figures. As these figures have been on the market for almost 30 years, I will pass on reviewing them yet again and instead focus on the helicopter itself.

On opening the box I was startled by the relatively small part count for such a large model as well as the somewhat, shall we say, “robust” nature of the parts. None of the molding reflects the typical delicacy of Dragon models, and I suspect this is a reboxing of the Panda UH-1N manufactured some years back. In fact, in general, this model has a sort of “welcome-to-the-70’s ‘feel to it. It reminds me of the old Revell 1/32nd scale Hueys, only less finely molded. However, that doesn’t mean that you can’t build a fine model from this kit, and a plus is that no tiny items get sacrificed to the Carpet God!

On the interior, Dragon has added a photoetched piece for the main control panel, which, although contributing some definition to an otherwise flat plate, doesn’t really reflect all the switches and knobs seen on the real thing. In addition, the backside of said panel should be a maze of wires and control boxes, none of which is on the kit part. I elected to go ahead and detail this area out since it’s clearly visible through the cockpit windows.

Moving on to the crew seats, although Dragon shows the rearward-facing passenger seats, the instructions don’t mention the other seats included in the kit, whose absence leaves some large holes in the floor and a notably empty cargo area. The rearward-facing seats have some problems as well, as building them as per the kit makes them “hunch” in a weird fashion. I installed the seat backs, let them dry, then installed the seats themselves, ignoring the placement holes in the floor. No matter what’s done, however, you’ll still have a few holes to patch up. I installed the rest of the passenger seats, which really aren’t difficult to puzzle out, but was surprised once again by the somewhat clunky nature of these. The cloth slings for the seats are very overscale and the supports thick rods. If I had to do it over again I’d probably scratch these items in toto. However, for the sake of the review I left them largely as is.

Despite all this, the interior still makes up into a passable imitation of the real thing with a little TLC.

Assembly of the body is straight-forward due to the nature of the castings, and I encountered no problems getting everything to fit. Interestingly, although the kit is for the later UH-1N, all parts are included to do the earlier UH-1H as well just in case you’re so inclined. But in either case the engine shroud covers nothing at all, and I found that it was useful to box in the engine and intakes with a little plastic sheet to disguise this deficit. While at it, you might want to gently round the edges of the intakes as this simple change can alter the look significantly for the better. The exhaust nozzles, on the other hand, are a bit more challenging as they are quite shallow and simply butt up against the back plate of the engine shroud. I drilled out the back plate behind them and pirated some of the “netting” from the optional engine side vents to give some depth to these. There is also a photoetch aerial fin included for the top of the engine shroud, but it was so out of character with the rest of the somewhat heavy moldings that I replaced it with one made from sheet styrene.

There is also a rather surprising glitch concerning the boom stabilizers. Not only do the instructions inform you to install these backward (the flat part should actually be uppermost) but the parts themselves are incorrect. They make no allowance for the taper of the boom, so installed as is they angle outward rather than parallel to the centerline. I found that the only way to correct this was to cut off the mounting tabs and trim each wing at a slight angle at the base. Easy enough to correct, but not something you want to spot after the glue has set!

There is a modest amount of filling necessary, but nothing untoward. Most of this is focused around the engine shroud and underside of the fuselage. Filling is also necessary on the boom panel insert, and this can be a bit tricky as there are so many rivets nearby. Take your time on this. You might also want to gently sand down the rivets on the model as they are a bit overenthusiastic. In prepping for painting, one of the things I did like is that all the windows can be inserted or applied after painting, which saves an immense amount of aggravation in my view. In addition, the rotors and rotor mount can also be inserted after painting, so these can be prepared separately. A note of caution – the tail rotor is a very loose fit. The support rod is too small for the hole and there’s no detail on the rotor hub. I opted for a simple Grandt Line bolt to cover this deficiency.

I studied quite a few pictures on the internet, hoping to find a more arresting color scheme for this vehicle. However, although there are plenty of elaborate schemes for IDF helicopters in general, the UH-1N only seems to come in overall sand or light olive. Oh well – I decided to stick to the kit scheme and see how it looked.

The decals – what there were of them – snugged down very easily, and the various windows installed with just a minimum of fuss. Once done, I was very pleased with the final result. Despite the relative simplicity of the build, the end result certainly looks the part.

So for someone looking for a simple, relatively straight-forward build, this may be the kit for you. And despite its lack of finesse and fiddly bits (often not visible on a completed model anyway) this makes a fine addition to any Israeli or helicopter themed collection. My earnest thanks to Dragon USA for not only the kit to review but also their expeditious replacement of a missing sprue. And of course the same thanks to IPMS/USA for letting me take a shot at this interesting vehicle.