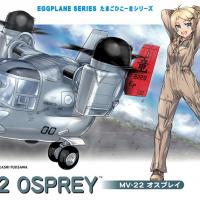 Wow what a fun little kit to build of a modern USMC war machine. The most interesting thing about the model is this kit can be built as a snap/or press tite build. No glue is actually necessary to construct this model.

Tenax 7 was used to cement all the parts and reacted well to the medium density Hasegawa plastic. Bondo 907 was used for the few seams that needed filling and again worked well with the Hasegawa plastic. I used Testors Clear Parts cement to attach the canopy and AV Plastic Putty for final seam fills and touch ups. The Model was painted overall using both Model Master Enamels and Tamiya Acrylics.

Every part was well and fully molded with no sink marks or pin marks visible. The only clean up on the parts was at the sprue attachment points.

Instructions are very well laid out in 8 steps which can easily be broken down. Painting instructions are for Mr. Color paints but also give the FS equivalents. On the reverse side is a clear drawing of what the camo scheme should look like and accurate decal placements.

I started the build by making subassemblies of the fuselage, stabilizers and wing assembly (steps 1-4), propeller blades, engine nacelles (step 5), and Marine figure (step 8). Once assembled, I painted the fuselage wing assembly and engine nacelles a base coat of Model Master FS36320. The propeller assembles were painted Tamiya X-18 Semi Gloss Black then detailed with Testors Chrome Silver.

The landing gear and wheels were sprayed the Model Master FS36320 and then detail painted with Model Master Chrome Silver and Tamiya XF-69 NATO Black for the tires. I painted the Marine figure using a variety of Tamiya Acrylics.

Once all the subassemblies were primed I began the task of smoothing the seams and dry fitting all of the subs. The engine nacelles press onto the wing using a vinyl sleeve. So far, so good. Next I installed the pilot and fitted the canopy. Canopy installed, I masked it with liquid mask and began the process of airbrushing the three tone camo scheme. Then to facilitate an easy application of decals the entire painted model received two coats of Model Master Clear.

Kit decals worked well with Micro Scale Decal Set and Sol. They are thin and very flexible and respond well to the solvents. The instructions sheet calls out two Marine aircraft markings for the MV-22 (VMM-265 and VMM-165). There are actually markings for three different aircraft on the sheet. A low visibility option is available for VMM-165.

Overall this kit was a very pleasant build. I spent less than 15 hours to complete including the complex multi layer paint scheme and the most extensive decal sheet for an Egg plane. Thank you Hasegawa and Hobbico for the chance to review this kit and IPMS USA for the opportunity to once again put glue and paint to plastic.