Into the Iron Triangle 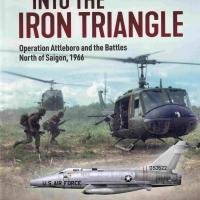 The Vietnam War, in my opinion, is not covered as well as many other conflicts both in the written word and in some cases modeling too. Arrigo Velicogna covers one of the parts of the war not talked about frequently and that is Operation Attleboro. This operation was not well detailed until recently and as late as 2018, it was poorly covered. The time frame involved is November 2, 1966 through November 23, 1966. These three weeks are analyzed thoroughly.

Starting at the beginning, the actions of Attleboro occurred three months after Operation Starlite so very early in the war. The command personnel are covered for both the Vietnamese and Americans including Vietnamese president Ngo Dinh Diem, American Ambassador Henry Cabot Lodge and General Maxwell Taylor. The background of the country and start of the conflict is examined as well as the personalities of the people involved. Mr. Velicogna pulls no punches explaining the onset and arrogance in many cases involved on all sides. Chapter 2 covers the Communists and their armies with their leaders and pictures of the leaders and soldiers are included.

Chapter 3 moves into coverage of the US Army including the Generals and soldiers. It also includes shots of the armor and artillery used. An entire section is devoted to the 1st Infantry Division, The Big Red One and their actions and efforts to deploy. There is also a nice shot of Martin B-57B flying over Vietnam. Chapter 4 is the prelude to Attleboro with clashes between US Forces and the 9th Division. This part of the book has excellent pictures of both planes and soldiers during these skirmishes. Each is covered specifically and there are several maps showing locations and tactics in the fight

A quick note here- the middle of the book contains eight excellent color plates and pictures covering the armor used (Patton Tanks, M113 and M107 Guns), planes (L-19, B-57, B-52, F-100 and F-5’s) helicopters (Huey’s), Uniforms from both sides, a page of actions shots in color and a color map of the entire area. Nice!

Chapter 5 moves directly into Attleboro. A timeline on page 57 covers the highlights of the fight showing the taking of the rice storages, battles and other significant events. Chapter 6 continues the battle as General William Depuy took over and covers his movement directives and tactics. These sections are both covered with period photos of armor and plane and soldiers.

Chapter 7 covers the Race to the Border. This section covers the end of Attleboro, the reasons the Vietnamese retreated and Mr. Velicogna’s summary and synopsis of the fighting and results.

This is a very well written and in depth book written from a historical perspective with great period illustrations and color plates. It is really nice to see the Vietnam War examined by a historian and not the movies. Definitely recommended