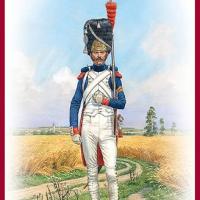 MiniArt has released several figure kits in 1/16th, giving us a wide range of ancients, medievals, and Napoleonic figures for our building pleasure. This figure represents one of Napoleon’s own Grenadier Guards, his Old Guard, which were his bodyguards both on and off the battlefield. Napoleon took a personal interest in these men, ensuring they were better paid and equipped than the average French soldier. It was not simple to get into the Old Guard – there were height requirements, the men had to be able to read and write, and they had to be veterans with combat experience. The figure is in the Full Dress Uniform, which includes white leggings and gloves, and tall red plume on the bearskin cap, so it had to be finished clean, with no “battle wear”. I had a great reference in the Osprey Men-At-Arms book, Napoleon’s Guard Infantry (1), by Philip Haythornthwaite.

The 56 parts are molded in gray plastic, with a brown plastic base. A parts map is included on a sheet that also has an excellent painting guide on the other side. There is some minor flash on the parts, which have good detail.

When you begin construction, lay out your sanding and filing tools as a surgeon would – you’ll need them. I use tube glue for figures due to its filling capability, and you may want to add that as well. Seams are everywhere – the bearskin hat, for example, has 4 sides, so that you have complete shag detail all around; however, you also have four seams now that must be dealt with. The body is also four pieces, and seams are all over, including on the crossbelts. The nice thing here is some of the seams are not visible when the figure is completed; for example, the backpack hides much of the back, so deal with those areas that will be seen. Other seams correspond to the edge of the waistcoat in front, and seams on the trousers and leggings.

On the lower front coat, there are three buttons just above the turn back. These are right where a seam is visible and it is hard to clean this area up. The buttons are too small, they should be the same size as the other buttons shown on the front of the coat, so carve them off, sand the seam smooth, and add buttons made from slices of plastic rod. The backpack is made of four sides glued to the front of the pack. Lots of seams here, plus the back is open, allowing you to see open corners when it is fixed to the figure. I glued plastic card in the corners and filled in with putty, rather than a solid piece across the back of the pack. This way, it would fit on the body better. The cartridge box also needed similar fillers on the rear.

You will find that some pieces have thin connection points. For example, the leggings are glued to the upper leg sections, but you will be gluing the thin wall of the parts to each other. I glued sections of sprue inside the legs to provide some kind of reinforcement. The figure is cradling his musket in his left arm; however, the weapon will not slide into place when the arm is glued on. So I left the arm off and painted details on it separately, then glued the completed musket to the arm (after I had hollowed it out a bit) when painting was almost done. I also left off the pack, sword, bayonet scabbard, and cartridge pouch for painting.

While the model is mostly accurate, there are some details missing that can easily be added. Under the cartridge box is a rolled-up forage cap. The cap had a tassel which hung from the right side. I made one from stretched sprue. Also, the cartridge box had a white strap with an end shaped like a grenade (similar to the insignia on the top of the bearskin hat). This buttoned to the crossbelt in the back above the bayonet, holding the field gear so it didn’t slide around. I made one from thin plastic card, and used a slice of plastic rod for the button. These details are shown in the painting guide. Most grenadiers also had gold earrings in both ears. I wrapped thin wire around a small nail, then cut it into rings with a sharp knife. I drilled small holes in the figure’s earlobes and glued them in with superglue.

The musket required some detail work as well. For full dress order, the bayonet would be fixed to the musket. You will find two bayonets in the kit, one in the scabbard and one without a scabbard. For some reason, the socket is much too large on the bare bayonet. I cut a small section from the bottom. I wrapped a thin piece of paper around the midsection of the socket to represent the locking ring, and drilled out the barrel. The barrel on the musket is too short, so I removed it and the ramrod and glued the bayonet onto the end of the musket, with the blade on the right side of the weapon. The ramrod should be as long as the barrel, so for strength, I drilled a hole where the ramrod should be and glued in a new ramrod made from stretched sprue. I don’t have exact measurements, but you can eyeball the artwork on the painting guide. Finally, don’t forget to saw off the bayonet socket from the scabbard.

With this figure, I was using colors right out of the bottle – basic Testors Dark Blue, Red and White – so I painted it in sections. I often had to go back and touch up various areas. The time-honored method of painting figures with white crossbelts is paint the belts first. I had sprayed white primer on the model, and this was a good base, but the crossbelts should be a pure white. The pants, waistcoat, and leggings were painted white with a touch of light tan to make them look like warm cotton cloth. I then highlighted these areas with pure white. I used a very light gray for shadow areas on all the white surfaces, including the stitching found on the crossbelts, a reinforcement found only on Guard equipment. The coat was very dark blue, so I went very light on highlights and mixed the dark blue 50/50 with flat black for shadows. I painted the coattails last so I had some area to hold the figure. I did not want to handle the white legs so I left them off until everything was painted. On the left arm are two chevrons; these are not corporal’s stripes, but service chevrons signifying 15-20 years in the army. The stripes are an orange shade called Aurore, kind of a pinkish orange, outlined in red. This color is also found on the grenade insignias on the coattails and the tassel for the forage cap.

The helmet plates were made of copper; however, they always look brass-colored in paintings, so I mixed gold and copper paint and used this for my base coat. The painting guide is fairly accurate; however, the buttons on the leggings were not brass, but white. Also, the Guard wore their hair powdered, so the hair in back should be white, tied with a black ribbon, while the sideburns and moustache would be the man’s natural hair color.

Once it was all painted, I glued the final parts on, the pack with the strap extensions, parts 18 and 19. The left one did not fit as well as the right one, so I had some filling and sanding to do (after everything had been painted!). When the figure was finally assembled, I gave it a shot of Testors Clear Flat. The cartridge box, shoes, and scabbards all received a coat of semi-gloss.

I did not like the base that came with the kit because it is hard to grasp; a good base is a handle for a model. However, since this figure is fairly tall, I wanted a low base, so I decided to use the kit part. It is a bright brown, so I toned it down with a thin coat of flat black paint, which I wiped off with a soft rag. I glued the figure to the base, then applied static grass to represent a marching field.

While this figure had a glitch or two, it builds up into a great-looking model! I want to try another one, and MiniArt has a Dutch Grenadier, wearing almost the same uniform, but with a white coat. Thanks to Model Rectifier Corporation and IPMS/USA for a fun build that I recommend to figure modelers looking for something different.

Parts trees and base