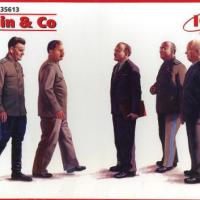 I have always been a fan of historical miniature figures, especially if I happen to know who they represent. IMC from Ukraine hase produced a set of figures that are right up my alley. This five figure set is called Stalin and Co., and consists of Joseph Stalin and some of his bad guys. Those represented are Joseph Vissarionovich Stalin, Commissar Nikita Sergeyevich Khrushchev, Minister Vyacheslav Mikhailovich Molotov, NKVD Chief Lavrentiy Pavlovich Beria, and Marshall Nikolai S. Vlasik.

Since I remember all but Marshal Vlasik, I knew what they should look like. I looked up each one as a backup to my memory and found that each figure looks exactly like their photos. I also researched their histories and found that they were truly not nice guys.

These figures are molded in hard, light tan plastic of a few pieces each. There was very little seam cleanup on all of the parts, and assembly was a breeze since the fit was perfect. I assembled all of the figures in less than an hour. After assembly, I mounted them on my favorite stands which are medicine bottles. They give the painter something to hold onto when painting. I then primed them with Duplicolor light grey automotive primer.

After allowing the primer to dry overnight, I painted them with Vallejo acrylic paint. I then painted the faces and some of the highlights and shadows with Windsor/ Newton artist oil paints. I only painted three of the five to show what they looked like unpainted and painted.

Overall, I was very pleased with this figure set. I loved everything about them, especially the accuracy of the faces on the figures. They captured each character perfectly. I also loved the ease of assembly and fit of the parts. I hope ICM will produce more historical figure sets other than Russians.

I would highly recommend this set for all modelers, not just those with figure painting experience. They almost paint themselves.

I wish to thank ICM and Squadron for the kit, and Steve Collins of IPMS-USA for giving me this set to review. I hope they give me more from ICM.