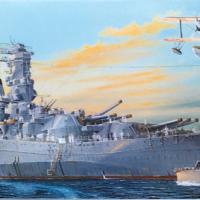 So much has been written about the battleship Yamato that anyone familiar with the Pacific War will know of the Japanese super battleship. Realizing that they could not compete one-on-one with the U.S.Navy, from the mid-1930s the Japanese shipbuilding philosophy was to build each of their new warships to be individually superior to any competing USN warship design. Commissioned into the IJN in late 1941 and early 1942 respectively, the Yamato and her sister-ship, Musashi represented the epitome of this philosophy. Weighing in at nearly 70,000 tons fully loaded, they were the largest battleships ever built and were not superseded in warship size until the advent of the U.S. Navy’s super carriers in the 1950s. As powerful as they were, Yamato and her sister spent much of their careers at anchor and did not fire their 18.1”guns in anger until the Philippines campaign of October, 1944, where Musashi was sunk by air attack. Six months later Yamato and a small force of escorting vessels made one last thrust at American forces off Okinawa, where Yamato was overwhelmed by U.S Fifth Fleet aircraft and was sunk on April 7, 1945.

With the steady release of one famous WW II battleship after another in 1/200 scale, it was only a matter of time before Yamato would arrive on the scene. Now she has, and in a very big way. The four and a half foot long box is filled with over 2,800 parts (many of those being photo-etched parts). Half of the box contains the hull. It is here that you begin to see how much thought went into the packaging. The

hull is held securely in the box by form fitted Styrofoam blocks at the bow and stern. The other half of the package contains the remainder of the kit parts in five separate boxes. The parts are either individually wrapped in poly bags (some sprue trees, or larger pieces such as deck parts or superstructure sections), or bubble wrap bags. There is a minimum of flash on any of the parts and detail is very good throughout.

The two-part full hull (left and right halves) has been “pre-assembled”, that is, held together with three metal braces screwed to the inside of the hull, along with several plastic internal cross-hull braces. The hull halves have not been cemented together. The main deck comes in three sections - the metal foredeck, the main wood-planked deck, and the aft cement covered flight deck. There is also a large, single piece lower boat deck. Few of the deck details are molded on but will be attached during assembly. The deck planking is comparable to what I’ve encountered on some of the nicer 1/350th scale ships (and therefore more to scale here) and the metal tread plating is subtle and well rendered - the plating in the small gun tubs is extremely fine. Only along the hull does the plating detail seem slightly overdone, but not enough to mar the overall appearance. Approximately 17 inches of anchor chain is included. Also included are four ~1/16” x 4” metal rods representing the propeller shafts.

The good news here is that the kit includes turrets and guns for all four 6” mounts. The modeler can therefore build Yamato (or Musashi) at any point during her career. The placement holes for the deck-mounted 25mm antiaircraft guns must be punched out from the underside, so the deck is smooth to allow for only the mounts necessary for any specific timeframe. The placement of the midships 6” turrets isn’t indicated anywhere on or under the main deck, so proper references will be needed if you decide to build the ship early in her career, but the superstructure is designed so that the wider base where the lower level 5” turrets and 25mm guns are placed are separate attachments on either side of the main superstructure. Bulkhead detail has even been molded on to the lower part of the main superstructure should that area be exposed. Parts are included to build the 18” main guns either with or without the canvas protective covers. With covers, the guns are stationary in the lowered position. Without covers, the guns can be elevated, and extensive photo etch is included for the gun barrels (extensive photo etch details are included for all of the main and secondary turrets). The barrels for all the weapons - 25mm through 18” - are molded with open ends, and the 18” and 6” barrels are subtly tapered.

Four aircraft are included - two F1M2 Petes and two E13A Jakes. The aircraft are molded in clear plastic, but I was pleasantly surprised to see that the fuselage and wing panel lines were few and subtly rendered. Each aircraft has cowl parts with recessed engine areas. I have read accounts that state that at the time of her sinking, Yamato had flown off all of her aircraft.  The kit includes seven different types of ship’s boats, both motor launches and oared boats, and some of the oared boats come in multiples of four or six. Most of the boats, especially the motor launches, come with extensive photo etch.

Fifteen sheets of photo etch are included in the kit. The sheets appear to be heavy gauge brass. These cover all the usual suspects such as towers, antennas, radar, ladders, walkways, handholds and foot rails, funnel grille, crane, deck plating and trolley rails, platforms and platform supports, handrails, and then some. The catapults are not rendered in metal but come as detailed plastic parts with PE details. According to the instructions, there should be enough railings to fit out the entire ship. None of the photo etch are optional parts, in that none of the parts are duplicated in plastic (for example, there are no optional plastic crane parts). All-in-all, there’s a LOT of photo-etch in this kit and it’s hard to imagine that any additional PE will be necessary.

Wow! Just…Wow! This is a highly detailed and well thought out kit that appears to be designed with the builder in mind. Assembly looks straight forward and relatively uncomplicated, although care and time will have to be taken considering the high number of photo-etch parts. The 92-page instruction booklet is clear, logically arranged, and easy to follow. The double-page color guide gives call-outs for six different paint brands (interestingly, the main ship color is indicated only as “Hull Color” - SC01 Mr Hobby paints only, with no reference to “Kure Grey” or  “Sasebo Grey” or any other standard Japanese shipbuilder’s color. Be prepared to break out your references). There are two small decal sheets covering the ship and aircraft. One last note: this kit is labeled as “1/200 Battleship No. 1”. Could there be more to come?

My thanks go to Debra Boyce and the good folks at MRC, as well as Phil Peterson and the IPMS Reviewers Corps for the opportunity to build and review this beautiful kit.