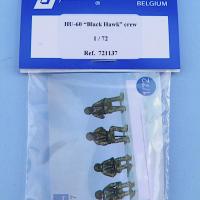 PJ Production does an interesting selection of items in resin including aircraft related figures in the more popular scales.

This set includes 4 figures designed to fit a Black Hawk of choice, though I am sure you could use them with any modern US chopper. You get a pilot, copilot and two air crew. They are molded as one-piece items in a light tan resin, except the pilot which has a separate arm to help position on the controls.

There were no air bubbles on the figures but there was a bit of flash and some mold marks that needed attention. The pilots have the regular bone dome while the aircrew get the added facial mask which makes painting them a breeze if you aren’t into painting flesh tones. They also have molded-on seat belts which doesn’t extend to their back making it easier to fit them into a seat.

I tried to paint mine after a friend who flew in Iraq back in 2007, putting the pilot in the tan flight suit and the crew chief in the green one. I also attempted to paint the chicken plate body armor in camo but didn’t have the greatest success.

If you like to crew up your birds these will make a good addition and help you not have to put so much extra detail in the interior.

Thanks to PJ Production and IPMS/USA for the review kit.