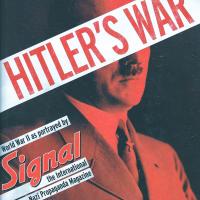 Signal was a propaganda publication by the German Wehrmacht stylized after Life magazine and published from 1940–1945. It was aimed at those in occupied, neutral, and allied countries, but it was never sold in Germany itself. Published in almost 30 languages, it was even available in the USA until December 1941! The magazine was kept under the control of the army and thus was independent of the Nazi Propaganda Ministry. This did not prevent it from being a propaganda laden publication. While it chronicled the conditions faced in combat by Germany and her allies, it also had a strong political message advocating for a “united Europe” under the “New Order” and for supporting the fight against the communists—even highlighting those former enemy combatants that chose to fight for the Nazis!

Hitler’s War: World War II as Portrayed by “Signal,” the International Nazi Propaganda Magazine takes a look at the war through the lens and writings of Signal. The author, Jeremy Harwood, adds interesting commentary alongside photos and pages from the magazine. Thus he is giving the reader not only period writing by the magazine’s staff but also analysis from the modern perspective.

The book is laid out in 19 chapters, each covering a specific time period or subject. Some examples are “From Poland to Norway,” “Dunkirk,” “From Blitzkrieg to Barbarossa,” “At War with America,” and “On to the End.”

It is interesting to see how in the beginning the magazine is full of the glorious victories for the Reich, but as the tide of war turns and their victories are no more, the magazine then shifts to sensationalized heroism by Nazi servicemen and to the barbarism of the Allied bombings. In the beginning there was much optimism and celebrating with a large part being dedicate to the events at the front, as well as stories of Nazi film stars and advertising from many German companies. Towards the end, reality was left far behind as the populace was spurred on to fight for the Fatherland against ever growing odds!

One of the highlights of the book is all of the photographs! Many are in color, and many will be recognized as some of the most famous photos from the WWII era. I do wish that on some pages (like page 67) the captions of the reprinted photos were in a larger font! Fortunately this is only the case on a few pages.

This is a very interesting book. I liked seeing how the other side viewed the war. The modern commentary was interesting and on target. For the historian there is much to learn within these covers. For the modeler, the color pictures will be helpful to those of all genres. There are also many diorama and vignette ideas for the armor, aircraft, and figure modelers. I can recommend this to anyone with an interest in WWII and to those who want to add many quality period photos to their collection as well!