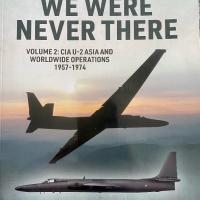 In this volume, Kevin Wright picks up where we left off in Volume one (CIA U-2 Operations over Europe, the USSR and the Middle East, 1956-1960). You can read that review on this website. After the shootdown and public humiliation of the United States, western European allies became reluctant to continue supporting U-2 operations. In response the CIA turned its attention to the other emerging super power, China. Much like they had enlisted and trained British pilots the CIA now began a campaign to prepare Taiwanese aircrew to operate the U-2. The initial operations focused on determining if the Chinese were staging military forces to invade their Island. Once it was determined that the threat wasn’t immediate, deeper overflights with a strategic purpose of tracking Chinas nuclear development and testing progress were conducted. It was a costly program for the Taiwanese pilots as four U-2 were shot down. In spite of the dangers, the flights continued into the early 1970s although at standoff distances with side looking cameras and sensors.

Operations over Cuba are covered in the next chapter. U-2s had operated over and around Cuba for well before the Crisis of 1963. It was interesting to see the intelligence learned from other worldwide U-2 operations helped the US see what was developing on the island nation. A U-2 photographed the presence of Medium Range Missiles on October 14, 1963 and a few days later Major Rudolph Anderson was killed when his U-2 article 343 was shot down over Cuba. In spite of their crucial involvement in the crisis, U-2 operations were not made public at the time. Operations were turned over to the Navy and Air Force once the threat was fully known.

Attention is next focused on Detachment G whose mission was to be a self-contained mobile force that would respond to wherever its services were needed. Based at Edwards AFB in Cailfornia, this unit conducted operations over, China, India, North Korea, North Vietnam and Cambodia. Many of these flights involved the use of air to air refueling on modified U-2F and E models. A chapter covers the preparation of the U-2G models that operated from the aircraft carriers Ranger and America. After the loss of Gary Powers on May 1, 1960 the US was concerned about finding friendly countries to host U-2 operations. The idea of carrier-based U-2 operations was tested and proved viable. Only one operational sortie was flown over the French Polynesian Nuclear test site before the program was cancelled.

Next up is a brief look at the U-2R. This version was larger with higher payload capacity and improvements for pilot comfort. The book winds down where it started, with Taiwanese operations which last up until the unit was disbanded in 1974. The author offers his analysis of the CIAs U-2 operations in the concluding chapter. It's clear that U-2 overflights and the intelligence they gathered have contributed to a stable global political environment. As a model reference, there is some useful detail photos especially for the carrier borne U-2G. The real value of this book along with its companion Volume, are the stories of incredible courage and sacrifice the pilots who flew these missions endured. The U-2 is a very demanding aircraft to fly. One only needs to look at the losses due to training in the tables at the back this book. Add to that the danger of overflying hostile territory, alone, for hours not knowing if your equipment is working or if a missile or malfunction will abruptly end it. This is a story that I’m glad is being told. Recommended to anyone with an interest in the often-overlooked history of aerial reconnaissance.

Many thanks to Casemate Publishers and to IPMS for this and the previous volume of this important story.