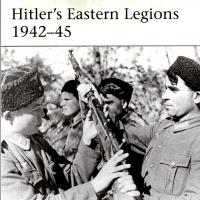 Dr. Nigel Thomas, PhD, is an accomplished linguist and military historian, formerly at Northumbria University, now a freelance military author, translator and military uniform consultant. His interests are 20th-century military and civil uniformed organizations, with a special interest in Germany, Central and Eastern Europe. He was awarded a PhD on the Eastern enlargement of NATO.

Johnny Shumate works as a freelance illustrator living in Nashville, Tennessee. He began his career in 1987 after graduating from Austin Peay State University. Most of his work is rendered in Adobe Photoshop using a Cintiq monitor. His greatest influences are Angus McBride, Don Troiani, and Édouard Detaille.

This book details the recruitment undertaken by the Nazis between 1942 through 1945 within regions of the USSR. Approximately 175,000 men had been recruited and organized into auxiliary units. Approximately 55,000 participated in combat. The men, all ethnic minorities, were classified into two large groups: the Turkomans, which were largely Muslim, and the Caucasians, which were Orthodox Christians. There were many sub-groups within these two main ones.

The illustrations alone make this book worth every penny. As seen in one of the examples, Johnny Shumate beautifully depicts the various uniforms to exacting detail. Additionally, there are illustrations of every unit’s arm shields and rank insignia.

Dr. Thomas comprehensively lays out the entire organizational structure of the Eastern Legions. The reader gets a real sense of how everything for these legions was developed: their training, structure, colors, uniforms, headgear, unit shields and insignia. An example of this is the fact that the cockades were changed for the Eastern Legion units. The traditional German circular cockade was replaced by the Tsarist Russian style M1942. Historical events are intertwined throughout, giving the reader a cohesive understanding of the timeline. Deployments in Poland, Northern Italy and within other regions are discussed in the last chapters of the book.

I strongly recommend this book. For all of us history aficionados, this book is a reminder as to how widespread the Germans pilfered resources (human and other) to assist them in their war effort. For hobbyist and model builders, the illustrations and photographs are an invaluable resource.

Thank you to Osprey for providing a copy of this fine book for review and thank you to IPMS for the opportunity.