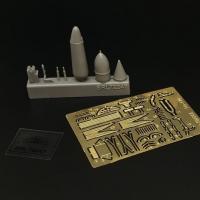 This product consists of a small metal photo-etch stamping which includes detail parts for a 1/72 scale model of a Henschel HS-126, along with some resin parts, including a bomb, smoke generator, and a few other components for the cockpit interior. When I requested this item for review, I assumed that it was the new Brengun 1/72 scale model of the HS-126, but it actually turned out to be only the accessory parts, but that’s OK. No problems. Since there are already three 1/72 scale kits of the HS-126, by Airfix, Italeri, and Matchbox, and I had already built all three, I decided to build the Airfix offering, and painted it in Spanish Civil War markings, as I already had several in the usual German Luftwaffe paint schemes.

The Airfix kit has been around since the late seventies, but being one of their later issues, even though the panel lines are raised, they are fine enough to be totally adequate. The cockpit interior is probably one of the better features of this kit, and it goes together fairly smoothly, although getting the parasol wing lined up and secure resulted in my creating a few new obscenities for my verbiage collection. Most of the mounting holes required enlarging with a small drill, but using super glue helped make the structure much more robust. The engine detail is good, and the propeller mounts easily onto the crankshaft.

The accessory set is made up of three parts. The photo etch sheet has an instrument panel, numerous small levers for the cockpit interior, some very nice seat belts for the pilot’s seat (but nothing for the gunner’s bench in the rear cockpit), and some bomb fins for the main armament. One problem is the bomb parts, one of which is the rear ring that attaches to the four fins at the rear of the bomb. This is provided as a long strip of metal which is supposed to be rolled into a circular ring. Good luck on that one. I ended up just using the kit parts, as the fins were thin enough and the kit provided a round ring for the end piece. In you opt for something else, you can always mount the smoke/gas generator on the bomb rack which attaches to the left side of the fuselage just below the pilot’s cockpit. The resin parts also include a tropical filter and a couple of machine gun barrels, which are very nicely done. There wasn’t enough depth to the Airfix kit’s gun trough, but I used the resin parts anyway. . In addition, there are some very small parts, including a gunsight ring, some handholds, and two steps to be mounted above the main wheels. Also provided is an oil cooler intake which replaces the kit part, and some triangular wires that simulate the structure ahead of the radial engine.

The instrument panels can be mounted to the panel in the kit, and there is a very small clear plastic instrument section which is to be mounted behind the main instrument panel face, and if you could get to it, it would provide a very nice cockpit setup. It is obviously designed for the Brengun kit, as it doesn’t appear to be designed for any of the other three kits. However, with the parasol wing, it is very difficult to see much of the front cockpit, but if you put it in there, you’ll know it’s there.

The instructions are printed on a half sheet of paper, with excellent drawings on both sides, although color information is lacking for all of the parts. Parts are included for several versions of the aircraft, including exposed and spatted wheels, fixed and folded access steps and steps above the main wheels for the crews to use when mounting or working on the plane.

This set can only improve any of the available kits of the HS-126. It is reasonably priced, and is certainly worth the expense and effort to super detail your model. Get one of these sets if you want an exceptional model of the HS-126. Highly recommended.

Thanks to Bill O’Malley, Phil Peterson, and Brengun for the review sample.