Helen Parsons At the Edge of the Universe Figure 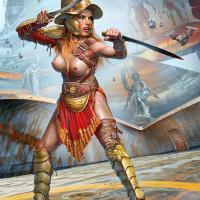 Master Box Models is proving time and time again to be at the cutting edge of figure modeling – providing the modeler with figures and figure sets that would normally only be seen in the expensive garage manufacturing field. They’ve created post-apocalyptic sets, fantasy sets and science fiction sets -- all of them innovative and surprising.

This latest figure comes from their science fiction series At the Edge of the Universe, and features a future crew member earning her keep in a futuristic arena of death. Parselen, otherwise know as the “master of two blades” wears mostly traditional gladiatorial garb including a simplified take on a Mirmillon helm. The only modern touch on her that I could discern was the use of very contemporary footwear rather than sandals.

Master Box Models uses a kind of reverse strategy on creating new figures. In most companies, sculptors create the figures and illustrators are then called on to illustrate the completed masters. With Master Box, illustrators create an image and the sculptors then follow. What this means is that there are often small differences between the illustrations and the figures supplied. In this case, the box art depicts our heroine wielding two kukri-like weapons (Ghurka style daggers) whereas the miniature is armed with a single kukri and what appears to be a gladius, or Roman short sword. The kit also provides the option for replacing one knife-wielding arm with a rather impractical shield, which I’ve included in some of my pictures as ground debris just so you can see what I mean.

Assembly is pretty simple, with relatively few parts. There is, however, a fairly substantive gap on the right side of the torso that will require some filling. In addition, the left arm will need some careful sanding to blend in with the torso. Otherwise, careful cleanup is really all that is required.

Painting, at least for me, was something of a challenge largely due to the number of leather straps but nothing that any competent figure painter shouldn’t be able to handle. They did an especially nice job on the face, which has a look of determination that lends some drama to the piece.

All in all, this is a really interesting figure of a type that most major manufacturers would shy away from, especially as it has a modest amount of nudity in the design. With a simple change of feet, this figure could just as easily be converted to a classic Roman gladiator from about the 5th century, so there’s a bit of flexibility in the design as well. I can’t help but applaud Master Box for its continued innovation in the world of injection molding. This is, as with many of their figure kits, a really fun build.

As always, my thanks to Master Box Models for offering this lovely little kit for review and to IPMS/USA for entrusting its review to my humble hands.