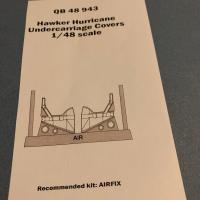 The Hawker Hurricane is a British single-seat fighter aircraft of the 1930s–40s that was designed and predominantly built by Hawker Aircraft Ltd. for service with the Royal Air Force (RAF). It was overshadowed in the public consciousness by the Supermarine Spitfire's role during the Battle of Britain in 1940, but the Hurricane inflicted 60 per cent of the losses sustained by the Luftwaffe in the engagement, and fought in all the major theatres of the Second World War.

The Hurricane was developed through several versions, into bomber-interceptors, fighter-bombers, and ground support aircraft as well as fighters. Versions designed for the Royal Navy known as the Sea Hurricane had modifications enabling operation from ships. Some were converted as catapult-launched convoy escorts. By the end of production in July 1944, 14,487 Hurricanes had been completed in Britain, Canada, Belgium and Yugoslavia.

Quickboost offers resin replacement covers for the Airfix and Hasegawa versions of the 1/48th scle Hawker Hurricanes. The images on their website look identical, but it is difficult to notice any subtle differences if any.

The resin parts in this set are cast with a common casting block attached to the long edge of the covers. The detail is chrisp. The parts may be separated from the casting block by light scoring with the point of a hobby knife, followed by a light sanding along the edge to remove any rough edge surface. Some care will be required not to snap off the narrow side cover during the removal process.

The interior surfaces of the doors includes some fine detail for the attachment points for the landing gear struts along with some fine raised rivet detail on the sheet metal surface, The exterior side of the doors has some very nice recessed rivet detail that does not appear over done. I superimposed the Quickboost doors over the kit's plastic doors and they are a near perfect match.

The instruction sheet, as it is, is a simple fold-out page showing the casting block resin areas that require removal from the undercarriage doors.

There are several 1/48th scale kits of the legendary Hurricane available from Airfix, Italeri, Hasegawa and Pegasus Hobbies. Although this set is recommended for the Airfix kit I decided to see how it works with the Hasegawa kits I have waiting in the wings. I have the Hurricane Marks IIC and IID. These kits share several common sprues, with the undercarriage doors being some of them. The shape of the undercarriage doors for the Hurricane are a bit unique in design from other aircraft of that era, and Quickboost has done their usual excellent job with a fine casting of the doors that make replacing the kits' doors worthwhile. There were no modifications to the model kit required.

The Hasegawa kit has limited rivet detail on the plastic itself, and therefore the Quickboost undercarriage cover may compliment that amount of detail, whereas online reviews of the Airfix Hurricane appear to reflect similar surface detail on the underside. It would appear the Quickboost undercarriage covers could be used with either kit manufacturer's Hurricane without noticeable differences in detail on adjacent surfaces.

The Hasegawa kit doors feature some rather soft detail when compared to the Quickboost doors. Recent Airfix kits show a greater attention to detail. Not every modelers shares the need to replace various kit part to improve overall detail, however for those of us that do these resin accessories will make a fine addition to the finished model.

I wish to thank Quickboost and IPMS/USA for the opportunity to review this product. Highly recommended.

Plastic and Resin Parts
Previous Next