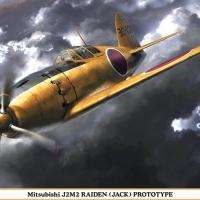 The J2M series of aircraft were designed by Dr. Jiro Horikoshi who also was responsible for the Zero / Zeke design. The J2M (Allied code name “Jack”) was designed in 1939 and first flown in March of 1942. A total of 621 J2M Raiden (Japanese for Thunderbolt) series of aircraft J2M1 through J2M6 were produced with the M2 and M3 accounting for 438 of the total built.

I’m a big fan of all things Thunderbolt including this fine Japanese aircraft that shares the nickname with our beloved P-47. The box arrived at my house and what greeted me inside the standard issue model box is what I would expect from any Hasegawa kit. A quick inspection of each individually bagged sprues again yielded no surprises. The parts were all flash free and the detail was what I expect from Hasegawa kits. Decals are provided for two aircraft, one of which is the all-orange J2M2 prototype, the second is a J2M2 Type 11 early model flown with the 302nd Naval Flying Group, Ataugi A.F. More on the decals later in this review.

This seems to sound like a broken record for me, but per normal aircraft assembly, we start in the pilot’s office. The assembly was very straightforward and fit was as good as it gets. I opted to go the decal route with the instrument panel. This was a very wise move since the decals went down perfect with a little micro-sol / micro-set. Painting the instrument panel by hand would have been tedious to say the least. (Unfortunately, the photos of the cockpit I snapped have gone missing, but you have to take my word for it that this is one fine piece of engineering.) Hasegawa provides a pilot figure and it has to be one of the best looking pilots I’ve seen. If you choose not to include the figure seated in the cockpit, Hasegawa include a pack / cushion for the seat.

One extremely nice feature associated with this kit is that Hasegawa has included five fuselage former pieces that positively align the two fuselage halves together. The front two formers tie in with the wing spar pieces to again positively align the wing to fuselage. Needless to say the fuselage and cockpit went together with no issues what so ever. Likewise the wing top and bottom pieces fit very nicely as well. As per my normal routine, I cleaned up the seams for both the fuse and wings. No filler is needed. I should mention that depending on which model you built, it will be necessary to remove a small bit of plastic along the leading edge to allow an exit hole for the wing canons. For the Prototype, a few wing panel lines will needed to filled in as well.

The wings are now mated with the fuse and due to all the great design, I had no problems whatsoever with this neither step nor did I need to use any filler. Before tackling the engine, the landing gear and propeller assemblies were completed with minimal fuss. The last big assembly to tackle is the engine / engine nacelle. Like the rest of the kit these went together without any issues. Because it is near impossible to see the engine after it is placed in the nacelle, I opted to not paint it. However, the exhaust stubs do extend past the cowl flaps and will need to be painted.

The last steps include the only small gotcha in my build. There is a small horizontal piece that connects the back of the pilots seat (headrest) to the top of the aft fuselage. I cannot overstress that you will want to dry fit this piece WITH the aft canopy pieces in place. The part in question is the (A25 + A29) assembly and it easily pushes down into the back of the pilots headrest. Despite the fact this assembly appears to go completely down into the headrest, it shouldn’t. IF like me you discover this error when trying to fit the rear canopy glass, forget it. It will be necessary to cut the part back out like I did and then re-attach it. Other than that, the canopy is thin and clear and fits with minimal fuss.

Back to the decals. First the good. These were some of the best behaving decals right out of the box. I would rate them better than many of the aftermarket decals I've used. They are very thin, strong and easily sucked down into the panel lines WITHOUT the use of the micro-sol. You will want to be very careful with the large meatball decals since they do tend to roll back on themselves as your pulling them off of the backing paper. Take your time and it will be fine. Now, the negatives about the kit decals. My set of decals had what I would describe as glossy smears on the decal sheet. It almost appears if there was a fault during the printing / finishing process. I didn’t give this any thought since I was going to gloss coat over them anyways. However, after two coats of Future, I can still make out the edges of these glossy smears. There is definite thickness to the glossy smear. My expectations are that a good flat coat would hide this anomaly but I can’t be sure.

This fine kit from Hasegawa was a pure joy to build. Fit was fantastic and it goes together with minimal fuss. The kit could easily be handled by beginners or veterans alike.

I would like to thank the good folks at Hobbico / Hasegawa, and IPMS USA for the chance to review this kit.