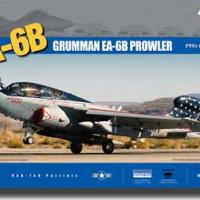 When this all new release became known to the modeling world, the announcements were accompanied with a plethora of photographs of an unpainted builtup with plenty of close-ups showing the incredible detail contained here. That created a near riot in the modeling community with posts on almost every forum stating that they couldn’t wait to receive it. Well, it has arrived and it appears to be well worth the wait!

Consisting of 233 parts on 9 light grey trees and one clear, this kit without a doubt puts the previous kits (Airfix and Monogram) most definitely in the “also ran” categories. Readily apparent are the scribed panel lines, optional wing folds (my personal favorite), options for under wing stores including 2 external fuel tanks, 3 ECM pods, and an AGM 88 “Harm” missile, crisp clear parts (NOTE – the canopy rear portions are molded in 2 pieces, yet the instructions show them as a single piece.) Also optional boarding ladders on both sides, a cockpit area ( including ICAP III mods ) that is a multiple piece affair that looks (at least to me) like aftermarket replacement would not be necessary. The intakes are multi part also, and first look appears that some care must be exercised here. The landing gear appears to be sturdy enough to support the weight, but I would bet a metal version is in the works at this writing.

The decals are very colorful with the one option offered being the CAG bird for VAQ 140 off the USS Eisenhower. They appear beautifully done, but there are dozens of alternate markings in aftermarket offerings available, so the choice is yours.

The only disappointment I’ll voice at this time is that when I opened the box, I found numerous loose parts floating around in the bottom of the box. Further, all the parts trees are contained in a single bag…not a good idea. As the build commences, I’m sure I’ll find out if any parts were missing. Time will tell.

Stay tuned for the build segment of this review coming sometime after the IPMS/USA Nationals.

Many thanks to Mike Bass and Laura Carney of Stevens International for the review sample.