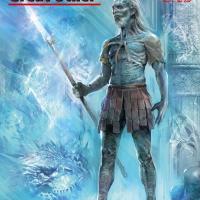 ICM Plastic Model Kits is offering the figure modeler an additional 'Game of Thrones' character for their collection. The previously release was an excellent 1/16th scale plastic kit of the 'King of the Night.' also known as the Ice Zombie King (or is it Zombie Ice King?) from the Game of Thrones series on HBO.

The Great Other, within the faith of Sailor, is also known as The Lord of Darkness, Soul of Ice, or God of Night and Terror within the folklore of the Game of Thrones saga. Or, you can just call him Al!

This companion figure is molded in fifteen, light gray plastic parts with a three-piece display base, in black styrene, and a single clear bit for the Great Others weapon of choice. This spear is tipped with 'Dragon Glass'. (Obsidian, for those that may be unfamiliar.). Additionally, ICM includes a painting guide and an 8x11 glossy, Hollywood-type print of the box art that is suitable for framing. Or, I suppose you could use it as a painting guide.

There aren't any assembly instructions per se, just remember that the torso goes above the legs. Assembly is pretty simple, although I did get the wrong feet on the wrong legs. Just kidding. It was the hands that I had trouble with. Oh wait, those are molded to the arms. Nevermind!

The right arm, that is sculpted grasping the spear, does have the fore fingers of the Great Others hand molded as a separate piece. This engineering allows for a more realistic pose of that hand holding the spear. Nice touch on ICM's part.

The legs are molded as one piece so no goofy seam to deal with. Those attach to the upper torso to which you glue on both arms. The aforementioned hands are nicely sculpted and show a great deal of animation as does the rest of the kit parts. There are four parts that comprise the Great Others leather lion cloth that get attached and then your pretty much done with assembly.

The base is molded in three pieces: an oval base, a bottom, and a top bit which has a rough cast texture. This engineer affords you, dear modeler, the opportunity to add some weight into that pocket to keep the finish piece from being top heavy. Another excellent aim on the part of ICM.

The rest of the figure goes together without too much muss or fuss. There are a some gaps here and there that will require a bit of putty to fill but nothing out of the ordinary. The gap between the torso and the legs is a bit fiddly to correct but keep in mind that the figures nicely sculpted loin cloth covers almost all of that join. One difficulty about that loin cloth...it doesn't fit all that great. The problem is easily fixed with some crafty modeling skills: scraping, sanding, and lots of test fitting.

The suggested paint colors supplied by ICM are for Revell and Tamiya paints. One aspect that I always find amusing about foreign manufacturers is the translation of their native tongue into English. In this case, 'suggested colors' in Ukrainian translates into 'used colors' in English. This is, after all, a fantasy figure so any colors that your choose to use will be the 'used colors'. So, not that far off the mark.

Painting began with the base. The base is molded in black plastic and could be sprayed with a clear coat of some sort and you'd be well with your rights to do that. I went with a coating of acrylic craft paints in a super secret blend of Burnt Umber, Raw Umber, and Raw Sienna. (Actually it was a small dollop of this one and a extra large dollop of that one, and a tiny bit of another.) After drying I did coat the whole thing in a clear coat of some sort.

The engineering of the base (with its separate top) gave me the opportunity to try a technique that I've been trying to prefect with varying degrees of success. Namely creating a realistic looking snow field. I used a small piece of matting that was cut to size, glued to the top, and then teased into proper shape. The material in question is the padding that quilters use when...you know...quilting. It should be available, by the yard, from your friendly, neighborhood fabric or craft store. [Modeling Tip #678: One yard will more than enough for several projects.]

The figure was completely assembled and given several coats of white primer. Great Other was then given a blue wash using Metallic Blue from Vallejo's Mecha color line diluted with alcohol. After drying and a coat of clear to seal the wash, highlights and shadows were applied using blue and white acrylics.

The hair and beard received some highlights of blue and desert sand and then an overall wash of gray to blend it all together.

The loin cloth was painted, off the figure, with a concoction of Raw Sienna, Burnt Umber, and Raw Umber that wasn't thoroughly mixed. Some highlights and shadows were added and then the lin cloth was attached to the figure and given a white wash from AK/ Mig.

In the Game of Thrones series, the army from “beyond the wall” all have striking blue eyes. I replicated that look with Tamiya's clear blue.

Great Other's spear is, again, molded in clear plastic. There are some nicely molded details on the tip as well as the shaft of the spear. I painted that shaft with that same special blend of acrylic craft paints mentioned earlier and wrapped the shaft with strips of Tamiya masking tape. ICM suggests that the spear tip be clear but I chose to go with a 'Dragon Glass-look' and painted the tip with a black wash (Vallejo), allowed that to dry thoroughly, and then clear coated the pointy end with Modge Pog.

One aspect of this release that provided a bit of consternation is the MSRP. After a somewhat exhaustive search, the suggested manufacturers price ranges from approximately 21.00 USD from Hannants to upwards of 44.00 USD from Squadron.!? I'd strongly suggest that you Support Your Local Hobby Shop and buy this splendid figure kit from them.

My appreciation to ICM and IPMS/USA for the review copy.