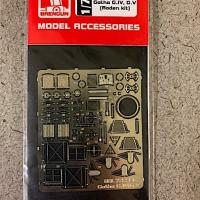 Brengun is very well known for their wide range of photoetch and resin sets for aircraft. They also produce 1/72nd and 1/144th  scale model kits.

This photoetch set for the Roden Gotha G. IV and G.V includes replacement parts for the yoke, guns, instrument panel, and radiator. Additional parts include propeller details, bomb racks, skids and gun swivel ring.  I was building the G.V and I was surprised to see that the bomb racks and skids for behind the landing gear were not used.

The photoetch bends well on the fold lines and is not too thick to look out of scale. Painting is tricky on the mesh fins mounted near the rear gunner as the holes will plug easily.

This set definitely improves the finished build. The radiators and guns give the most contribution to the build as most other pieces are on the bottom or in hard to see areas.

I would definitely recommend this to anyone building a Roden Gotha G.IV because the G.V only uses about half of the photoetch provided.

Thank you to Hauler-Brengun and IPMS/USA for the review item.