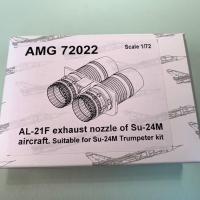 This set is designed to be used on Trumpeter’s Su-24 kits. The set consists of 10 resin parts which allows you to assemble a pair of exhaust nozzles for your Su-24 Fencer. Each nozzle set is comprised of a section with the rearmost fan blades, the flame-holder for the afterburner, the exhaust pipe and the rear nozzle assembly. The set also includes the rear engine bay bulkhead and the oddly shaped section between the two nozzles.

The parts are cast in grey resin which is of medium hardness which is easily cut with a razor saw or a sharp Xacto blade and sands easily. After washing the parts to remove any casting residue, I used a fine razor saw to separate the parts from the casting blocks. The instructions clearly show where to cut the parts from the casting block. I use a fine razor saw and then cleaned up the cuts by sanding the parts on a piece of sandpaper attached to a piece of glass from an old picture frame, this helped me keep the edges flat straight. While most of the parts have round cross sections, the casting process allows each tube to be cast in a single piece, rather than halves like most injection molded kits, so there is no seam to detract from the interior details.

While the paint on the nozzle parts was drying, I installed the rear engine bulkhead in the lower fuselage half. Unfortunately, I later discovered that I had installed it reversed. There are three notches for each nozzle assembly on the rear bulkhead. These notches should be on the inside of the kit lower fuselage as these notches are the locators for the nozzle assemblies which are mounted by pushing them through the rear bulkhead from the inside and the notches establish both a secure mounting point for the nozzle assemblies and ensures they are at the correct depth once the tail piece is attached to the lower fuselage. As the rear bulkhead was a bit taller than the kit part, I had to gently sand it down with a sanding stick until I was able to mate the upper and lower fuselage parts with a minimal gap. The odd shaped fairing between the engines was also installed at this time and it also need to be slightly sanded on the top to allow the kit parts to close.

Once the sections were fully painted, I used superglue to assemble the two nozzle assemblies. In order to ensure the exhaust nozzles lined up with the tail cone part, I taped the tailbone onto the lower fuselage section, then inserted and aligned one engine so that it was centered in the tail cone. Once aligned, I ran a bead of superglue around the forward side of the rear bulkhead to fix the nozzle section in place. Once this had dried and set, I repeated the process on the other nozzle set.

This is a nice set and was a lot of fun to paint as I got to experiment with replicating hear discoloration on the exteriors of the exhaust pipes. Unfortunately, it is a case of “I know it is in there” as once the nozzle assemblies are installed and the fuselage closed up, all you can see are the interiors of the assemblies as everything else is covered up.