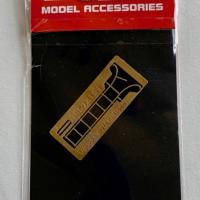 I asked for this review product as motivation to finish a 30 year old project. On my “shelf of doom” sat a partially completed Fujimi Cutlass which I purchased from the Squadron Shop near Silver Spring, MD circa 1987. Remember when Squadron had “brick and mortar” stores?

While waiting for the package to arrive, I dusted off the Fujimi box and was surprised to discover it was not as far along as I thought. More on this, later.

As soon as the small box soon arrived, I opened it immediately. “Piece of cake,” says I. Brengun’s flat package has one small photo-etched fret with the ladder and its fuselage brace. Instructions show the location of the brace along with color recommendations. The pieces were easily removed from the fret with a hobby knife. Since the ladder was so narrow, I used a pair of needle nosed pliers to bend the sides perpendicular to the steps. Next, I glued the top step to the opposite side - this is the only step not attached to its opposing side. Finally, I added the brace to the two supports protruding from the back of the ladder. Along the way, I gently sanded the nibs where I cut the parts from the frame. Close up photos show I should have taken more time with this step. This entire build took about eight minutes.

To add a little heft to the assembly, I brushed on two coats of Mr. Surfacer 1000 as a primer. Next, I spayed Tamiya’s Lemon Yellow and did some light chipping and wear with their Metallic Gray and Medium Sea Gray colors. Drying time for the primer and paint added a day to the build. The ladder measures 1.75 inches for 9 scale feet which looks about right. Overall, I was quite pleased how it turned out.

Contemplating the natural metal finish on the Cutlass, I figured I had another couple of weeks before my model would be completed. To expedite the review, I called my friend and fellow modeler, Walt Fink, with a proposition: could I use his completed F7U-3 as the display model for my Brengun ladder. He, of course, agreed. You can see our collaborative work in the accompanying photo.

This was a very quick and easy accessory to build. It adds a nice bit of color and interest to the model. I would certainly recommend this accessory to any builder, even one who has little experience with photo-etched pieces. In researching price, I could only find Brengun’s products for sale on their own website and from Hannants in the UK. Brengun has a large number photo-etched accessories for aircraft, including ladders for other planes.

My thanks go to Brengun for supplying this product and to IPMS/USA for sending it to me.

Ladder in Place
Previous Next