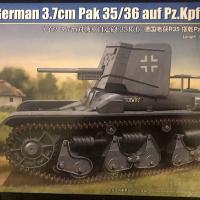 The R35 was a small, light infantry tank that was originally designed by Renault for the French Army. After the fall of Paris, many of these tanks were captured and pressed into service by the German forces. These were used as either second line tanks or they were modified for other rolls. The particular vehicle covered by this new kit from Hobby Boss covers a vehicle that has been modified to carry the 3.7cm Pak 35/36.

The kit comes packaged in a small box with a colorful print of the vehicle on the box top. In the box are 6 sprues of light tan plastic, a PE sheet, two sprues of tracks, a small decal sheet, and separate parts for the hull. The parts are well detailed and well molded. There were no flash issues noted. The instructions are pretty typical for Hobby Boss, there are some color callouts, and the instructions are pretty clear. I had no issues with incorrect part callouts or any printing issues. One thing to note here is that this kit does contain a nearly complete interior. This is a nice addition as the interior will be visible through the turret ring.

The first two steps in the build are completely dedicated to building the engine. The detail here is pretty impressive. The parts all fit well, and I had no major issues. The only things that could be added for further detail is wires to the engine and belts for the fans. The first issue that I encountered was in step 2, Parts C38/39 need to be pushed through the sides of B24. Unfortunately, Part B24 is very fragile and has large sprue gates on it. This meant that when I pushed the C parts through B24 the whole assembly disintegrated.

In step 3, I left the parts for the doors off until after final painting, I intended to leave the kit as open as possible to showcase the interior. In step 4 the main radiator for the engine is assembled. I had no issues with the fit here, but this is the first instance of the one issue that I had with the instructions. There are no paint callouts for the majority of the parts for the interior. You will need to find reference pictures for the interior of this vehicle. I chose to paint the radiator Model Master Non-buffing Steel and will call out the rest of my paint choices as needed.

Up next is the rest of the interior, this is covered in steps 5 and 7. In the start of step 5 the lower parts of the hull are assembled. At this point I also added the back plate from step 3, Part A4. The fit of this part to the rest of this hull is a little rough, I needed to use a fair amount of filler to hide some seams here. For the interior color I used a custom mix, 1 part Tamiya XF-1 and 3 parts XF-54. All of the control levers for the driver were painted XF-69 NATO Black. I also painted the seat XF-69 with the PE frames the custom light grey mix. I had no major fit issues with the rest of the parts in step 5, but I did leave the return rollers off until final assembly.

In step 7, I had no issues with the interior parts and I painted most of them the custom light grey mix. Moving on to step 8, I assembled the final drive before installing it to ease painting. This did make the installation of the engine a little rough. I had to trim the edge of the connector to allow everything to slot in. I painted the final drive Model Master Non-buffing Steel. Skipping ahead to step 11, I painted the interior the same custom light grey mix and the other details were painted XF-69 NATO Black. The detail here is decent but the dials for the driver have almost no detail. If you can source some dry transfers for these gauges I would recommend it as they are highly visible if you leave the hatches open. After installing the hull roof in step 12, the interior is complete. For such a small kit there is a surprising amount of detail crammed into the tiny hull.

Returning to step 10, I started to add some the exterior details. The fenders were easy to install and the only issue that I had was with the PE added in this step. The locations for the tiny PE parts are a little vague. There are no bending guides and the exact locations aren’t shown in the instructions. I left the doors off until final assembly as I intended to leave them open. In step 12, there is a PE part shown that is not called out in the instructions. Part PE3 is the PE plate for the manufacture and it is shown but not mentioned. I left most of the rest of the parts here off until after painting.

Up next is the suspension, and here is the only major issue that I have with the kit. The kit includes some very nice suspension units that do a good job of representing the suspension on the real vehicle. Each assembly is a complex build of up to 13 parts, including PE parts. These assemblies are very fiddly and the PE is a little tough to work with. The PE is a little thick and there are no marks on the PE to assist in bending. There are also no bending molds included in the kit. As I wanted to ensure that painting was easy, I installed the PE on half of the D18, D27 and B9 parts while they were still on the sprue. Unfortunately, this meant that the holes in the PE didn’t match the holes on the other parts very well during assembly.

I ended up trimming the location pins from the parts that weren’t already attached to the PE parts to ease assembly. The rest of the parts were also very fiddly and it pays to use a slow setting glue here to allow yourself to get everything lined up. Once the assemblies were complete it was time to install them and the return rollers. After how fiddly the suspension assemblies were, I was pleasantly surprised with how level they were, for the most part the wheels met the ground with no issues. The last comment on the suspension is for the idler wheels, there are two options in step 6 for the idler wheel. The kit does have separate parts for these options but the instructions show the same parts being used.

Next up was painting. There is only one option provided in the kit, overall German Grey with some very basic unit decals. I used Tamiya XF-63 German Grey for the overall paint color. The track parts were painted XF-69 NATO Black. There are only 4 decals used in the instructions, 2 crosses and two tank names. All performed very well over a light coat of PFG with no silvering.

Finally, it was time for the tracks. Step 9 covers the build and installation of the tracks. The kit has some very nice link and length tracks, the detail and molding on the links was very nice. Typically, I tend to prefer using individual, movable links for most armor kits but I was pleasantly surprised by the link and length tracks here. They were easy to work with and played well with Model Mater cement. I did end up removing two links per side to improve the fit.

Last up is the final assembly. I added details like the lights, tools, the exhaust and the 3.7cm Pak. I had no issues with the tools or lights, all of the parts fit well. I did have some minor issues with the assembly of the exhaust. There is a PE heat shield for the exhaust and this had no easy way to complete the folds. There are no fold lines and no molding block. I had only two minor issues with the assembly of the 3.7cm Pak. First the location of J3/J29 is pretty vague, it looks like it is installed on the lower right of the breech but the instructions don’t actually show this. Lastly, Parts J7 are very fragile and easy to break. I lost one during assembly and as a result my gun shield leans slightly to the right.

This is a great little kit with an emphasis on little. It was designed originally for a two-man crew and Hobby Boss has managed to pack a ton of detail into a tiny footprint. I didn’t love the design of the main suspension units but other than that the kit was a lot of fun. Highly recommend for anyone with a little experience and an interest in odd WWII armor. It is also a nice introduction to kits with interiors. My thanks to MRC and IPMS for giving me the opportunity to review this kit.