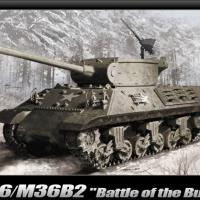 The M36 was a late war tank destroyer based on the M10A1 tank destroyer hull and a new turret to carry the 90mm gun. The M10A1 was based on the M4A3 Medium Tank hull with the Ford GAA 8-cylinder 500 HP engines. In early 1944, the Army had 600 M10A1 hulls ready, so they diverted them to be used with the new 90mm turret to become M36s. Towards the end of the war, M10 tank destroyer hulls were used and these became M36B2s. This hull was based on the M4A2 Medium Tank using two conjoined 6-cylinder GM diesel engines to make a 12-cylinder engine. This kit offers both versions to be built by having different engine decks, exhaust and rear engine plates.

The kit includes six bags of sprues, with two to three sprues per bag, one photo-etched sheet, decals sheet and white string to be used as the tow cable. The sprues are a combination of past M4, M10, M51 Super Sherman and M36 releases dating from 2003 to until 2016. This kit is based on Academy’s M36 kit released in 2003 with some new parts and decals. The photo-etched parts used are only the headlight and taillight guards. There are two instruction sheets. Each being folded four times, so basically eight pages front and back. There are no clear parts.

Starting with the road wheels and suspension, there are options for three types of road wheels – early, mid or late model manufacture. The same applies to the sprockets and rear idler wheels. Since this vehicle is based on the M4, there will be plenty of leftover suspension parts for future M4 projects or added stowage. The first problems I encountered was the instruction calling for part G10, the bolts strip for the transmission cover. This part does not fit and is designed for the other transmission cover included. The correct part is G11.

There is a full interior which includes driver and co-driver’s compartment, fire extinguishers, canteens, ammo boxes, radios, etc. A lot of the parts have a slight outline on the interior walls for mounting locations. I located the radio too far rearwards and had to move it while installing the 32 ammo containers on the sponsons. These ammo containers are fiddly to install since the front holders just glue to the top of the sponsons. They need location holes to hold this part in place while installing the ammo containers. When gluing on the rear engine plate, you must remove tabs off the back for it to fit. The instructions do not point this out.

There are two periscope guards on the O sprue, but not instructed to installed them. The instruction photos show these, so I went ahead and put them on. This step also says to paint the interior of the driver’s and co-driver’s hatches the same color as the interior, flat white, but that is incorrect. All hatches were painted the same as the exterior color, especially on the M36 since the hatch interior face forward while open. They would be huge white Mickey Mouse ear targets if you follow the instructions.

I wanted to use the optional front glacis plate that includes a hull mounted 30 caliber machine gun. It mounts fine to the upper hull, but when attaching the upper to the lower hull, the transmission interior wall and linkage are in the way. I did not see any options, other than cut away the interior details, to get this machine gun option to work. I went back to the regular front plate without any gun. Another problem with attaching the hulls together is that there is a 1/8" gap between the upper hull and the transmission bolts. I had to trim the 1/8" off the rear engine walls to get these pieces to mate up. I also had to file down the interior transmission wall to get the from plate to sit flush with the front fenders. I re-read the instructions to make sure I did not make a mistake, but it must be a design flaw. I confirmed another builders having this same problem with this gap via a youtube video.

The tool locations have a faint plastic outline, but no locator hole as in other kits. I sanded these outlines off, since you can still see them after mounting the tools. I then just glued the tools to the hull. The track cleats are individual parts and look really nice mounted on the side holders. The open turret has a lot of detail parts, like seats, scopes, hand wheels and full gun breach. Plus, the fit is very good. The gun barrel is two pieces, but the seam runs down the side and is easy to clean off. I used the muzzle break to give the gun a beefier look. I also added the armored roof for the turret but only opened half to show the details inside. There are six knockout holes on the inside of the hood, so a little putty is needed here. The tracks are very tight when glued together, so I left the rear idler wheels lose to aid in installing them.

Academy includes their new slide-molded 50 caliber machine gun. The barrel support ( the hollow part with holes) is great since it actually hollow now. Most other kits have the barrel molded with the receiver group, but Academy has the barrel in two pieces and molded separate. This is by far the best plastic 50 caliber machine gun right now. I hope Academy will offer this as a separate kit in the future. The ammo can and its holder is also great and highly detailed.

There are decals for six different vehicles, three World War II and three Korean War tank destroyers. I had a decal silvering problem on Academy’s M4A3 Battle of the Bulge kit, so I laid down a couple coats of Future and sanded it very shinny. There was no silvering with this kits decals, but these do seem a little thicker than normal.

This kit builds into a very good looking tank destroyer. I like that you have the option to build it as two versions with six different markings. I would like to thank MRC and IPMS for the opportunity to build and review this kit.