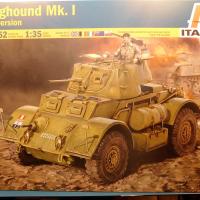 The T17 Staghound Mark I armored car was designed in the United States based on British specifications at the beginning of World War II. The British were looking for a wheeled reconnaissance vehicle with a high level of armor, well-armed and highly mobile. Chevrolet started production in late 1942 and a total of 3000 units were produced. British and Polish units started fielding this vehicle in the spring of 1943 in the Italian Campaign. The Staghound was used by many different counties during the post war era up into the late 1970s.

Italeri first released this Staghound kit in 2007 under number 6549. They used this kit to make a AA version in 2008, number 6563. Tamiya re-boxed it in 2008 as their number 89770. Italeri used this kit in 2009 as the base for their Mark III, a staghound with a Crusader turret on it. This kit being reviews is basically a re-box on the original 2007, but without a 48 page reference book that was in the original.

The kit includes four medium green colored sprues, a 6” piece of thin thread for the tow cable, a 37mm metal gun barrel, a clear plastic sheet on sticky paper with the spotlight lens and two front windows cut into it. The photo-etched sheet is only about 3”x3” and includes headlight guards, tool straps, fuel tank straps and front windows frames with wiper blades. All the sprues were packaged in the same bag. I had three parts that were broken off and scuff marks on the fenders and hull from the sprues rubbing together. The instruction sheet is 16 pages with 22 steps and five painting/decaling versions. Something I noticed different about these instructions is that list parts by their part number first then the sprue letter – just the opposite of most other manufactures. Plus, they are not drawings, they are photos of the kit parts with lines showing where to mount them.

Assembly starts with six-piece hull and moves onto the suspension. Aligning the hull pieces together is tricky since they do not really have a positive fit position. I did step two first which is gluing the rear two plates onto the bathtub hull since they had better alignment marks. I then went back to step one and glued the front plates on. The suspension also is a little sloppy fitting. It is very easy to get the leaf springs misaligned, then they will not fit the mounting brackets you must glue on the hull. The mounting brackets have a small divot in the hull to glue too. A pin on the brackets and hull hole would have worked much better. This is a foreshadowing of the rest of the construction. There are faint outlines on the hull where parts need to be attached-no positive, locking fit. The weld marks on the rear hull do not line with where the parts come together. Also, most of the weld marks look like little rivets all in a row.

When building the two side fuel tanks, they show building the tanks and mounting boxes off the vehicle, then in the next step. Gluing his assembly to the hull. I think it would be a lot easier and get a better fit by building these assemblies on the hull. I had trouble with the photo etched fuel tank straps not connecting to the hull mounted attachments points. The tanks can be glued into the wrong position very easily, which will cause problems later when trying to mount the fenders or side doors. The mounts do not line up with the weld seams on the hull. If you build up these assemblies on the hull, you can adjust the position to get all these seams to line up properly.

The fenders will need some sanding and cutting to get them to fit the contours of the hull correctly. There is a shallow channel in the hull that about half the fender fits into, so I glued this section first, then the next night, glued the back sections and held them in place until dry. I still ended up with a small gap in the front fenders. The instructions fail to tell you to drill the holes in the front fenders for the mirror mounts.

With the hull about half way complete, the instructions jump to building the turret for the next five steps. I skipped this and finished the hull using the last six steps. The headlights have no clear parts for the lens and the plastic lens parts have a sink hole in them. Drilling them out and filling with a clear paste would improve the look. The photo etched headlight guards need to be bent using the template on the A sprue you must cut off. This works well and they have a solid mounting point on the hull brackets. The photo etched tool straps are easy to install on the tools, just bend them around the handle and glue together. I wish I would have test fit the wheels before painting, since I went to install them at the end and the car does not sit evenly. Only three wheels touch the ground, the fourth is about ¼ high and I am not sure why.

The turret assembly is quick, since there is limited interior parts. There is a turret basket with a couple seat and a simple gun breach. The 37mm metal gun barrel in a nice inclusion, but does not have the taper that the real 37mm had. The co-axle machine gun barrel needs to be drilled out and the cooling jacket in not well detailed. Same with the 30-caliber machine gun on the top. A photo etched replacement barrel would help here. The seam where the turret top and bottom meets is large. On the real vehicle, this was a casting seam, so I loaded it with glue and squeezed the parts together to get a bead of melted plastic to fill this void. The instruction says to paint the interior of the top hatches gloss white. This is wrong and one of my modeling pet-peeves. As far as I know, all countries painted hatch interior the same color as the external color as you would not want a huge, white hatch totally ruin your camouflage or been seen from the air.

The decals are very good and thin. I have no problems applying them and with just one application of setting solution, they conformed to the paint great. I like the different vehicle represented on this decal sheet. I was wondering why there was no national insignia stars, but after some internet research, I never found a Staghound with a star on it. I used the decals for the Polish vehicle that served in Italy. I did add the French vehicle triangle to the turret for a little more detail.

This was a quick and enjoyable build. I finish construction in about 10 days with the most time spent on cleaning up parts and correcting some fit errors. This really is not a difficult kit to build and has room for a lot of added details. There are a few after-market photo etched sets available, along with replacement barrels.

I would like to thank Hobbico and IPMS for the opportunity to build this kit.