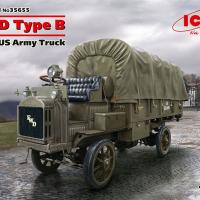 I had heard that ICM vehicle kits were a bit of trouble and that care was needed in building them. I can honestly say though that they did pretty well with this kit, which went together smoothly with very little fuss. It makes an interesting looking addition to my WWI model collection.

The Four Wheel Drive Auto Company (FWD) was one of the first American companies to develop and produce all-wheel drive vehicles. The U.S. Army ordered 15,000 FWD Model B three ton trucks, known as Truck, 3 Ton, Model 1917, during WWI with over 14,000 delivered. Additional orders came from the United Kingdom and Russia.

The kit comes as the standard ICM kit does - with a colorful box top that slides off of an enclosed brown cardboard box. Parts were packaged well and details were crisp with no flash to speak of.

The first 30 steps cover construction of the lower frame and suspension. The only tricky spot was adding all the center pieces in between the two sides of the frame and getting everything lined up, but in the end things went smoothly. The wheels are made up of four parts each, with the two tire sides enclosing the rim. No matter how I tried, I couldn’t get the parts clamped together enough to avoid a seam down the middle of the tire, but adding some thin putty in the cracks and applying some nail polish remover seemed to seal things up. The decal scheme art shows the seam, but everything I have found otherwise has it as solid rubber.

The radiator housing is next, comprised of four parts. Construction of the engine that is included in the kit was next and things went smoothly despite some of the small parts involved. I would have liked to have seen some painting instructions here as I had to rely on some restoration websites for references. After adding the engine, exhaust, power transfer box, and crankshafts, we move on to the construction of the treadplate step boards which have nice detail. From there we move onto the engine cover that locates the driver seat, as well as construction of the bonnet. After attaching all of the driver controls and fire extinguisher, louvered side panels, and cooling fan- we are next presented with the fuel tank and seat construction. The box art shows a canvas cover for the driver, but there are no parts present to represent it in the build. Between that and the fuel tank right behind the seat, it must’ve made for a pretty rugged ride! After attaching the front lamps and searchlight, stowage bin, and crankshaft, we move on to the construction of the bed.

The build-up involves a bottom piece with 5 crossbars underneath, a front panel, two side panels with supports, and a two-piece tailgate as well as two stowage boxes that fit underneath the front of the bed. The whole assembly fits onto the chassis with slots and tabs. You have the option of installing the tilt stowed or in place, with hoops for the former and five styrene parts representing the canvas for the latter. I opted for a combination of both after a tip from a friend on a forum—installing the hoops and then using plain old facial tissue with Future sprayed over it to conform to the hoops. I added some Value Gear crates and cargo with homemade labels and opted to have the canvas partly flipped up.

There are two paint schemes offered in box- and the colors vary as long as you like khaki for the canvas and olive drab for the truck. The schemes include a U.S.-based Quartermaster Dept. truck and a French-based truck from 1918. The only splash of color comes from the embossed FWB logo on the radiator which is brass. I used Vallejo Model Air paints and AK Interactive and Mig Productions washes and pigments for the finish. No figures are included in the kit, but ICM makes a pair of driver figures that works well.

I couldn’t have picked a better kit for my first ICM vehicle. The fit was near perfect and construction was not too fiddly despite all the steps to create the chassis and frame. I had the whole thing built up pretty quickly and am pleased with my attempt at recreating the canvas top. I would have liked to have seen the canvas cover for the driver, but I imagine someone with a modicum of scratch building skills could make up for the loss quite easily. It ends up being a nice looking truck to round out one’s WWI collection.

My sincere thanks to ICM and IPMS-USA for the review sample.