FW-190 Defence of the Reich Aces 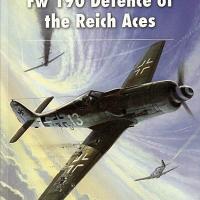 The author, John Weal, has written a number of books on the wartime career of the Focke Wulf FW-190 and its pilots, and this book fills a gap that needed to be filled, that of the Defense of the Reich units that operated mainly over Germany from mid-1942 until the end of the war. The book mainly covers the activities of JG 1, JG 2, JG 4, JG 26, JG 76, and JG 301, and is confined primarily to the radial engine variants, from FW-190A-4 through FW-190A-8. These units operated primarily against American 8th Air Force bomber formations, and they were highly successful until the introduction of the long range P-47’s and P-51’s, which tipped the balance in favor of the Americans.

Nevertheless, these units, and the incredibly brave pilots who flew the airplanes, continued to inflict losses on the bomber formations, but by 1944, it was a lost cause, and as experienced pilots were lost, their replacements, however enthusiastic, could not hope to be as successful as their predecessors, as the fuel shortages that were caused by 8th Air Force bombing resulted in cutbacks in the Luftwaffe’s training programs, meaning that replacement pilots lacked the experience to survive long in combat. It is an interesting and heroic story, and the author tells it well.

The book is primarily a story of the men, rather than a technical history of the aircraft. There is plenty of that kind of material elsewhere. The photos are mainly of the type that have come from old dusty photo albums or news releases, and give the reader a sense of what these people looked like, how they dressed, and how they interacted with their fellow aircrews. Many interesting and previously untold accounts are presented, along with the final fates of the men. A remarkable number of them survived the war, with a few later killed in flying accidents postwar.

For the modeler, the book presents a lot of information, including 32 color profiles with lengthy explanations in the appendix. For the historian, a graphic account of the campaign is given, along with reasons for the outcome. The only thing the author could have added would have been a map showing the locations of the German fighter bases and the routes the American bombers used to get to their targets. The author obviously researched his topic thoroughly, as he is fluent in German, and he has personally interviewed many of the participants in these epic air battles.

Like previous Osprey books on the subject, this one is excellent and definitely worth getting. It fills a gap in my FW-190 library. Now if he could just do a similar work on FW-190D aces, and possibly one on the North African campaign, the library would be complete. Don’t miss out on this one. It’s a keeper. Highly recommended.

Thanks to Sara Batkie at Osprey Publications and John Noack of IPMS for the review copy.