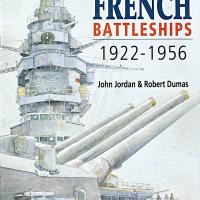 Battleship lovers – break out your drool cups! Everything you always wanted to know about French WW2 battleships is here! This heavy book is the ultimate – last of the FMN battleships. You now have the sine qua non of French battleship books. You could stop reading this review right here because you have all you really need to know about this book, but your battleship addiction means you want more details. Let’s chase that dragon!

The authors are the world authorities on French naval history and have been and still are publishing fact-filled, adventure-packed books on Marine Nationale Francais (FMN) topics. John Jordan is a prolific writer and has become an expert on the interwar naval period (that’s between WW1 & WW2), after focusing on post-WW2 Soviet naval topics. He has been editor and a major contributor to Warship, the yearly update and history books from 2005 and counting. John has published books on the famous international naval treaties that weighed heavy on naval ship construction after WW1, the Soviet navy, and other French warship classes from the 19th-20th centuries, mostly by Seaforth Publishing. He speaks and writes fluent French and English.

Robert Dumas, Like John Jordan, is a former teacher who retired in 1999 and proceeded to publish Books in French about the French navy, and many articles for Warship. It was only a matter of time before Robert and John conspired on this book, and I look forward to new and updated English-language versions of other books from them.

This book was originally published in 2009, but since then a large amount of hitherto hidden or secret data behind the former Iron Curtain has been brought to light, and incorporated into this 2020 reprint, replete with new line drawings by both authors, and ably aided by many big names in European 20th century warship authors and some illustrators. Most of the line drawings were by both authors who added updated drawings for this edition.

You get a thick, heavy softbound book with fold-ins on the inside of front and back covers with author information and listing similar books on the French navy. The dimensions are 11¼ high x 9 5/8 wide and almost 5/8 inches thick (288 x 245 x 16 mm). There are 224 pages, with small print – but an easy and fast read. Production quality is first-class on thick, semi-gloss stock. This book is built to last many spine-cracking openings. The covers are in color with a watercolor painting of the Strasbourg on the front cover and eight pages with 23 images of color profiles/plans of each battleship in different fits in the middle of the book. There are 16 maps, 66 Tables, 93 line drawings (most with extensive explanatory text), and 137 B&W photos (many are large and clarity is extremely good – a rarity). Most pages have more maps, line drawings, table or photo areas than text areas. This makes for an easy and fast read.

This book is everything you always wanted to know about 20th century French battleships, but were not afraid to ask – all the answers are here. Focus is on four ships – Dunkerque, Strasbourg, Richelieu and Jean Bart, and their rather short careers, along with a plethora of plans, designs, and what-ifs. The first thing you see is an impressive watercolor painting of the Strasbourg on the front cover, with a description of the contents on the back cover.

The book has the usual title and copyright pages, Table of Contents, Abbreviations (very important), Preface, and 14 more sections (Introduction, nine Chapters, Colour Plates, Conclusion, Sources and Index). Text presents the thinking of the French Navy, political issues, and foreign navy developments, crafting a fascinating behind-the-scenes look into how the French navy turned out like it did, or more to the point, what it did not turn out to be. The Introduction covers the French battleships starting at 1900 and through WW1 rather quickly, setting the stage for the ships in this book. This section includes plans for battleships before the international treaties (Washington and London), making for very interesting information of a virtually unknown topic.

Chapter 1 describes the changing plans for capital ships after the Washington Treaty of 1921 set limits for number, size and armament of battleships, ruining pre-treaty plans.

Chapter 2 describes design and characteristics of the post-treaty efforts to use the French allotment with new builds, which became two new battleships (sometimes referred to as battlecruisers), Dunkerque and Strasbourg. These ships incorporated radical new and advanced design elements, some of which were not as helpful as hoped. The main armament was all forward, in two quadruple turrets, a first for capital ships, but the main guns were only 13.5in caliber, behind the 15-16in main guns of other navies. However, they were built for a specific purpose – more as a fast cruiser/pocket battleship killer than to slug it out with other battleships. This is what the French navy needed and could afford. The drawings and amount of detail are simply awesome and incredible.

Chapter 3 is the career of each ship, first as new and celebrated capital ships, then as Allied heavy units working closely with the British, and then the details of why the French battleships ended up in North Africa and then were attacked by British battleships. The deficits and attributes of these ships were clearly shown during actual battle service. Because of treaties signed with the Germans, Dunkerque and Strasbourg did not fight back as vigorously as was feared, and both eventually ended their careers in 1942 in Toulon, France by scuttling to prevent them from falling into German/Italian hands.

Chapter 4 details the design and characteristics of updated French battleships Richelieu and Jean Bart after the London Treaty expired. Again, the line drawings, photos and tables and breathtaking, giving an intimate knowledge of the strengths and weaknesses of these designs. These were truly battleships armed with increased antiaircraft weaponry and 15in main artillery to counteract potential German and Italian designs, and were mostly scaled-up versions of Dunkerque and Strasbourg, with the same radical all-forward main armament in quadruple turrets. Some of the flaws of the first two ships were rectified, and these two ships were considered the equal of other battleships of the times.

Chapter 5 is a history of the Richelieu from 1935-1943. Richelieu was not quite ready for combat in 1940 when France capitulated, and like Dunkerque and Strasbourg, Richelieu was sent far away from France (and German troops) to Dakar and attacked by British battleships and seriously damaged in 1940, where she languished for political reasons until being sent to America for refurbishment in 1943.

Chapter 6 details the history of Jean Bart from 1935-1943. Jean Bart was barely functional with only one main turret containing its guns when sent to North Africa in 1940, and could not be completed before American battleships and aircraft incapacitated her in the 1942 North African troop landings. In the meantime, plans were made to build additional battleships, the Clemenceau, Gascogne and Alsace, upgraded repeats of the Richelieus, except that Gascogne has her two main gun turrets positioned front and rear, and Alsace was lengthened and had three triple gun main turrets. Again, their design, characteristics and fates were presented in great detail – they were ready to build, but never laid down because docks were unavailable before the collapse of 1940 – another forgotten piece of history.

Chapter 8 shows what happened to the Richelieu as an Allied warship, refurbished in the United States and sent to sail and fight with the British East Indies fleet, her return to France after 52 months away, and her post war career and refurbishments, until her mothballing in 1956, and breaking up in 1968. Chapter 9 gives the fate of Jean Bart, finally arriving in France in 1945 and being finished as her intended battleship self in 1950 instead of as an aircraft carrier or scrapped. Because of new antiaircraft gun installations, she actually joined the fleet in 1955, the last commissioned battleship ever. She participated in the Suez Canal Crisis of 1956 and fired four 15in shells at Port Said, but saw no other actions. Next year, she was put out of service and finally scrapped in 1970.

The short Conclusion concentrated on the bottom-line serviceability, defects and other observations of these ships, along with their value, followed by Sources and the Index.

This book does not disappoint and excels in being a final authority on French battleships of WW2. This topic has only recently had the scrutiny and attention to detail as the other major navies of WW2 have enjoyed. I applaud the authors for a highly detailed description of how these ships came to be and how they were built, and how they worked and how they died. Although the excellent photos, illustrative line drawings with technical details and battle histories are what we have been waiting for, the insights into the financial and political climates and the infrastructure issues rounded out this book into a real history and not just a nice set of specs – topics seldom detailed in most books on battleships. The reader should develop feelings for these inauspicious ships after reading this book.

This book is long-awaited, and super-very-much-highly recommended as the ultimate authority on French battleships of WW2. The price of USD $35 is a bargain for the enormous amount of detailed information of every facet of the ships, from the ammunition, electrical wiring and the packing material of void spaces to their seldom discussed histories.

Modelers of these ships will wear this book out, and the little details of differences and different appearances give a large variety of ways to build and detail the increasing numbers of new kits for this Fearsome French Foursome, and for accurizing older kits of these ships. The plans and designs of the ships that never were are a gold mine for scratch builders. Anyone interested in naval architecture and engineering would also appreciate this book. The authors have breathed new life into French warship modeling, long a dearth for what was once considered the fourth largest navy in the world. Vive le France!

Thanks to the author for this eagerly awaited tome on French battleships, to Seaforth for publishing this history, to Casemate Publishers for getting this book to us, and to IPMSUSA for sending this book for review.